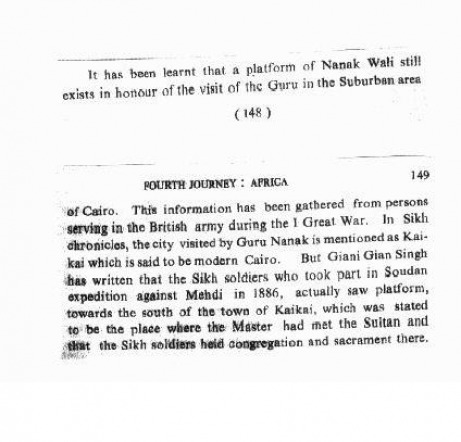 Giani Gian Singh and Prof. Surinder Singh Kohli are absolutely right when they say that A Sikh Regiment went to Cairo on their way to Sudan in 1885-86. They saw the Platform in the Citadel in Cairo. They held a congregation there and distributed the" Prashad" of nine hundred Egyption Pounds( Reference: Twarikh Guru Khalsa, by Giani Gian Singh). This platform was last time pictured in 1920. The last picture was taken by "Archnet.org" under the title" Architures in Cairo".After 1925, this platform and "The Palace of the King" was restricted to the visitors. I was able to see this platform and took its picture( which is available on my web-site)  with the help of Egyption Police.

Sikh Unit with British Officers in Cairo, 1885( by courtesy of www.columbia.edu) 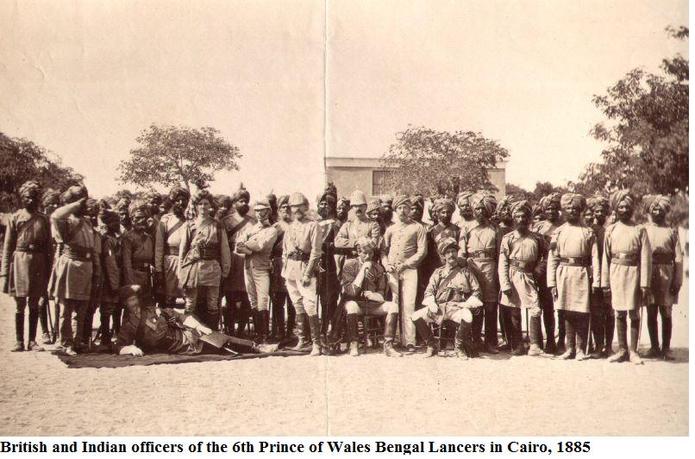 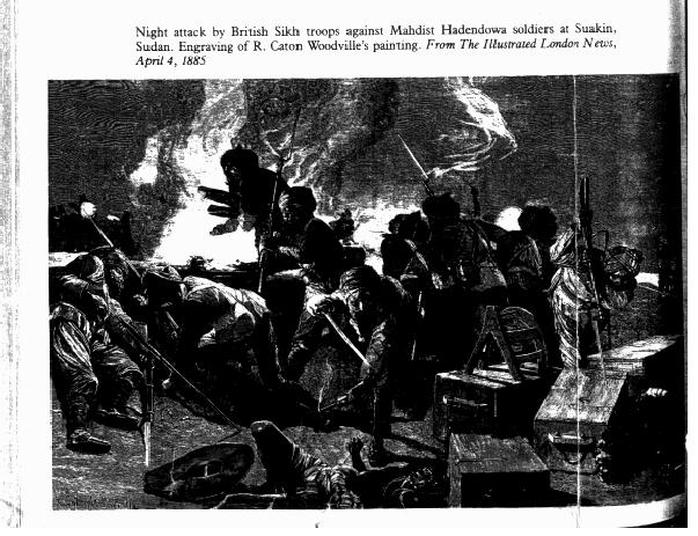 This is the cutting of the " The Illustrated London News", dt. April 4, 1885. This means Giani Gian Singh and Prof. Surinder Singh Kohli are absolutely right when they said that a Sikh Unit of British Army went to Cairo, on their way to Sudan for "Sudan Expedition" against Mehdi. The " 20th  Punjab Infantry" went to Cairo. The whole Indian Contingent for "Sudan Expedition" is given in the next picture.

Sir Hector Macpherson was the Colonel of the contingent and Richard Gorden was the General for this contingent. By courtesy of " A Wargamer's Guide To The 1882 Nile Compain And The 1884-1885 Gorrden Relief Expedition( in Sudan), published by, Jessica Productions, 186, Torbay Road, Harrow, Middlesex HA2 9QL, 1993. 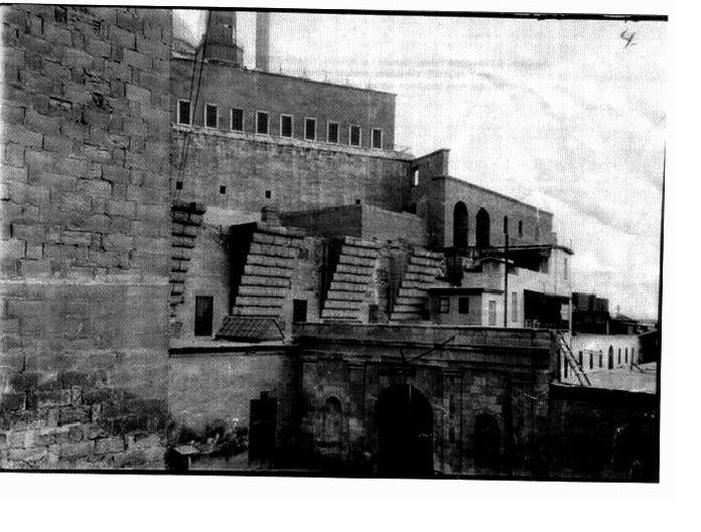 Satguru Nanak Sahib is called Al-Wali-Nanaka in Egypt.The portion with tick-mark, had the name of Al-Wali Nanaka Mukam. Mukam means "Takhat" or sitting place or Plateforum. This image was taken in 1920. this means this plateforum was in tact upto 1920 and some years later. But now it is totally restricted by the Egyption Government.I could cover this Plateforum with the Egyption Police D.S.P.(Whose name I can not disclose due to Security Reasons).By courtesy of Archnet.Org. Image no.62352. 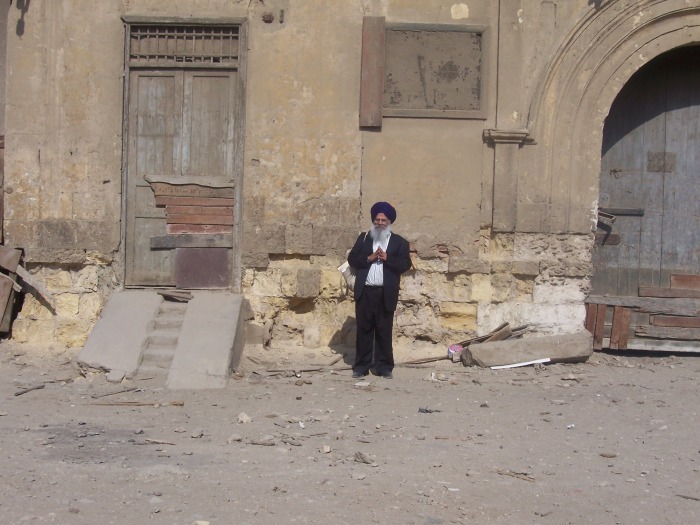 On the left of the writer,Bhai Harpal Singh Kasur, is the room where almighty Satguru Nanak Sahib and Bhai Sahib Mardana Ji stayed in 1519.On the right of the writer is the door to the well, which supplied water to the whole Citadel, and was linked by a canal which is closed now and the water-supply is done through pipings.On this well, Almighty Satguru used to take bath.Sultan, Khayr Beck stayed in the Casser-Al-Ablaq."Casser" means Fort or Quilla in Arabic.This Quilla is located behind The Mohammed Ali Mosque in Citadel, Cairo. "Citadel" means the boundary wall, in Arabic.On this Plateforum, Almighty Satguru Nanak Sahib uttered the Shabad----" Majh Mahalla-I------Pahle Pyar Laga Than Dudh, Duje Maai Baap Ki Sudh, Tije(Third) Bhaya Bhabi Beb---------" Holy Page No. 137 of SGGS.He has classifed this wordlly life in ten parts.( From my Photo Album of Egypt, Africa)

Front Door of The Well in Citadel,Cairo 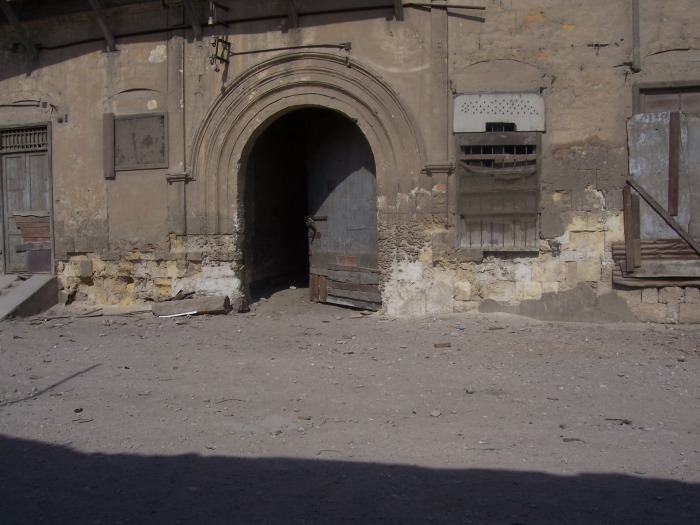 This well of Citadel, Cairo, was connected with two canals, one from Port Said(Suez Canal)and other from Nile River. But both the canals had been changed to the road these days. The name of the road is Port Said bothways.( From my Photo Album of Egypt,Africa) 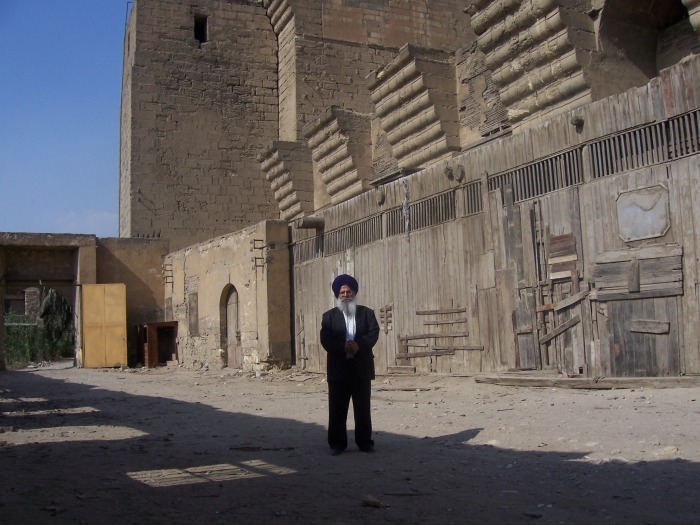 These are the corbels which gave support to Casser-Al-Ablaq, the official Palace of Sultan Khyar Back, Ottoman Empire.But now it is totally forbidden for the visitors. I went there on the motorcycle of a police D.S.P.of "Police Museum" within the pricint of Citadel, Cairo.It is the grace of the police D.S.P. that I could take some pictures and make the movie for just three minutes.(From my Photo Album of Egypt, North Africa). 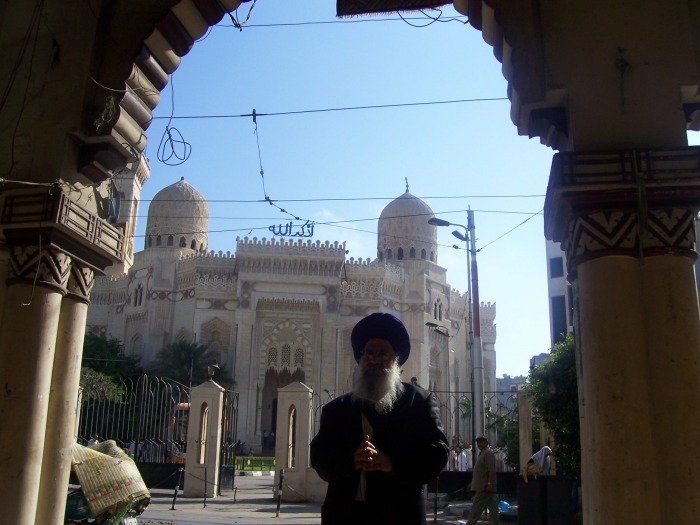 This the picture of Al- Abu-Alabes Ilsmore alias Sufi Mosque in Alexandria, where Almighty Satguru Nanak Sahib and Bhai Sahib Mardana Ji stayed in 1519.This is the "Mukam" on Sitting place of Al-Wali-Nanaka-Mukam.This was confirmed of Mr. Ahmed Raffat, Senior Translator,Alexandria Library(Bibliotheque Alexandrina) and his friends.On the confirmation of Ahmed Raffat, I rushed to the sufi Mosque which is located near Rasteen Road, Alexandria.In This Sufi Mosque,Mr.Shaikh Ramadan(Whose Picture is Given Next) told me that they do the Simran(Isma) by saying Vahid Alah, which means Ek onkar( God is One).The difference between main strem muslims and Islamic Sufism, according to Ahmed Raffat and others is that the traditional Muslims believe that Mohammed Sahib was Prophet after he got Revalation, but Sufis believe that Mohhammed Sahib was a Prophet by birth. The years before his Alham can not be excluded from him.(From my Photo Album of Egypt, North Africa). 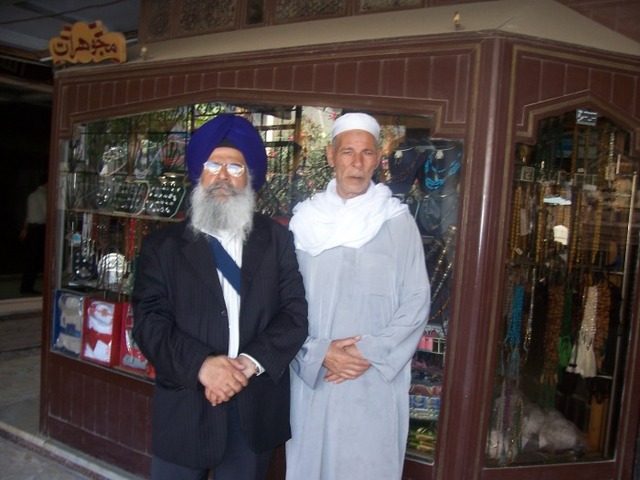 Miss Hameera of University of Alexandria, did the translation whatever Mr. Shaikh Ramadan said in Arabic. Mr. Shaikh Ramadan told us that Sufi Muslim did the simran by saying "Vahid(One) Allah.Which is the Arabic of "Ek Oankar". This means sufi do the simran almost the same way as the Sikhs do. Though, we use "Waheguru", which means "O Guru! You are Great".Sikhs also believe in one God.( From My Photo Album of Egypt, North Africa). 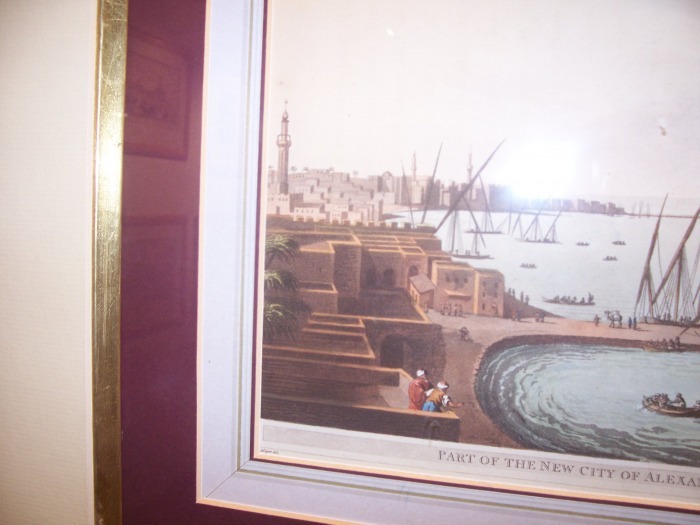 Mr. Ahmed Raffat told me that old paintings and gravings are available in their "Picture Gallery of Dr. Mohammed Awadh" locted in their Alexandria Library.I immediately, went to the said picture gallery and managed to get some old picture of the Sufi Mosque in Alexandria.The full name of this mosque is"Al-Abu-Alabes Ilsemore Mosque".(From my Photo Album of Egypt, North Africa).