In 1575, Satguru Ram Das Sahib appointed four masands, one in the east, and three in western world.. On the eastern side, Bhai Gurdas Ji himself was appointed in Agra. He explained the Sikh Philosophy, at the conference of Diwan-I-Ilahi. of Akbar, on September.30, 1577 (Ref. Mughal court proceedings, and Akbarnama).
Satguru Ram Das covered, those areas of the world, travelled by Satguru  Nanak Sahib and Bhai Mardana Ji. He appointed Taru, Bharu( Son of Bhai Malo, a Pima Indian of Mexico), and Dasa.Taru was a masand of Kabul, Middle East, upto Eastern Turkey (Ref. Mahan Kosh). Dasa Was the Masand of Africa and Mauritius (Ref. Satguru Nanak Sahib and Satguru Hargobind Sahib in Malindi (Kenya, by Harpal Singh Kasur). Their fore -fathers purchased some land in Bamunanika, Uganda.Satguru Nanak Sahib went to "Dese Wa"( Prachin Panth Prakash, by Sardar Rattan Singh Bhangu, 1841. This "Dese Wa" is called Uganda and East Africa ( Ref. A.H.Keane, 1896). For your kind information, Bamu Nanika was named by King Jemba (Ref. "Travels of Guru Nanak", by Surinder Singh Kohli, 1969). The earlier name of Bamunanika was "Bamoli"( Ref Queen Mother, Antola of Uganda).
Bharu was the son of Bhai Malo of Santa Fe( Ref. American Sikhs in Sixteenth Century, by Bhai Harpal Singh Kasoor). He covered almost all the North and South America. As regards his "Kirat" he along with Mandoza Indians, ans Tewa Indians, did dairy( Ref. "The Cattle Industry of Southern Arizona 1540-1940, A Ph.D. thesis of 1949, by Dr. J.J.Wagner, published by University of Arizona, Tuscon, 1952).
In this article, I am  describing abount Dasa, his head quarter, and first Sikh warehouse in Kenya with a Nishan Sahib,in 1891). The location of first Sikh warehouse, is  in Malindi (Kenya).It is s of Dasa was in Makindu Sahib, Kenya. This Makindu Sahib is located near river Athi, where Sikhs were inhabited before 18th century (Ref  A Personal letter to William Franklin, dated September 26, 1768. Athi River is a"limped stream". It is also called Stony Athi River (Ref. Kenya Gazette, 1952. Due to stones in it, its water is cristal clear and is free from mud. There was a meeting held  in London, which was attened on Sep.26,1768, by George Forester, George Brown and others. They were asked to change the alphabet. The spelling of the word"Sieek" was changed by every writer. Finally, the modern spelling of "Sikh" was made by the attendants of that meeting.( Ref letter, dated Sep. 26th  1768, to William Franklin).The letter was written by Lady Elizabeth Craven, an extensive traveller, describing  the beauty of the areas around limped streem, which is Athi River. This Athi River starts from Thika Falls. This william Franklin was in the Mughal court of Shah Alum-II. In his correspondence to the Lady, he describes the future scheme of change alphabets. with this proposed change, the history of Sikhs have been resticted to a few countres.This is British Government'S first policy of "Divide and rule", particularly against Sikhs and their bright history. " Guilty land" is Punjab This letter is written in reply to a lady, who wanted to visit beautiful land of East-Africa Therefore, Satguru Ram Das not only said the world famous Holy Lines" Bani Guru Guru Hai Bani Which Bani Amrit Sare---", but also covered almost the whole world.
Bibliography:-
(1)---Enthology,Fundamental,Ethinical Problem,By A. H. Keane, PP 389, published by Oxford University Press, Oxford, 1896.
(2)---Prachin Panth Prakash, by Sardar Rattan Singh Bhangu, 1841).
(3)--- Akbarnama, by Abul Fazal.
(4)--- The Cattle Industry of Southern Arizona, by J.J.Wagner, published by University of Arizona,  Tuscon,1952.
(5)---The Travels of Guru Nanak, by Surinder Singh Kohli, published by, Publication Bureau, Punjab University Chandigarh, 1969.
(6)---Dialogues, English And Hindustani, by John Borthwick Gilchrist, published by,Parbury, And Allen Bookserller, London, 1826 (Its first edition came out in 1787).
(7)---Bansawalinama Dasan Patshahian Ka, by Bhai Kesar Singh Chibber,1765,published by Singh Brothers, Amritsar, 2005.
(8)---Travels in The Coastlands of British East-Africa, by W.W.Fitzgerald, published byDawsons of Pall Mall, London,1970(Its First editio came out in 1896 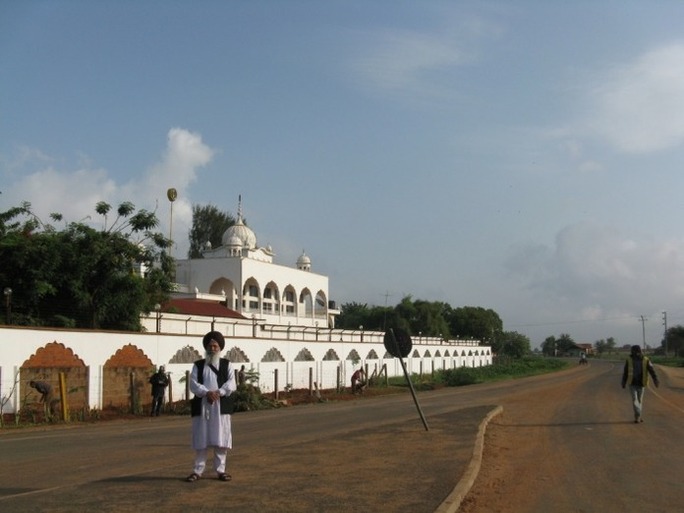 The New Makindu Sahib Was Rebuilt by Our Seniors, in 1896, When The Lunatic Line was Built in 1896. 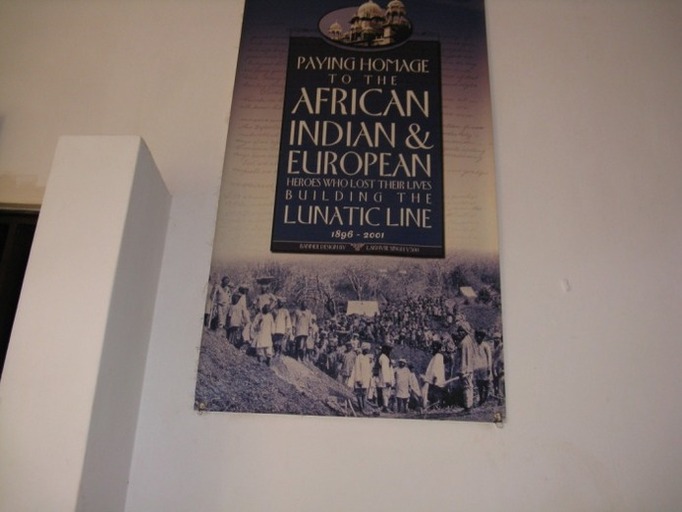 The road to stony Athi River( pure limped stream), in Kenya (East Africa) on Nairobi-Mombasa  highway(By courtesy of my photo album of East-Africa). 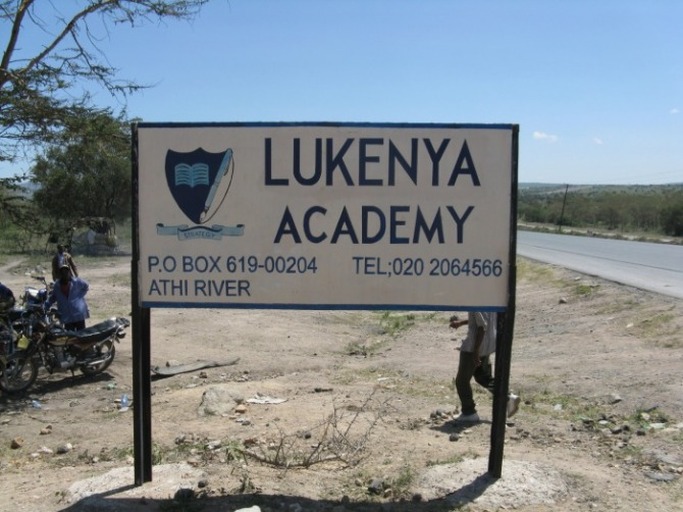 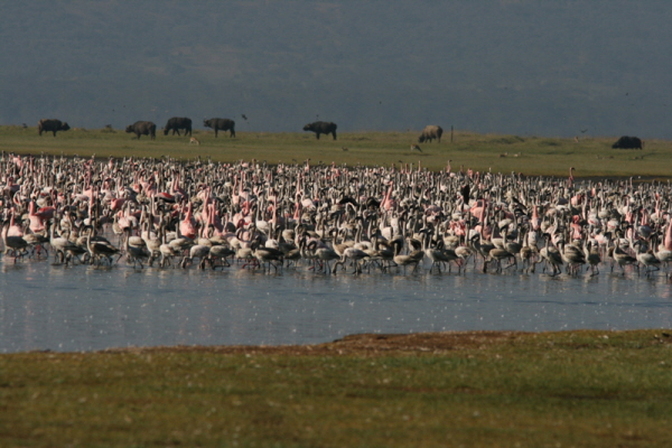 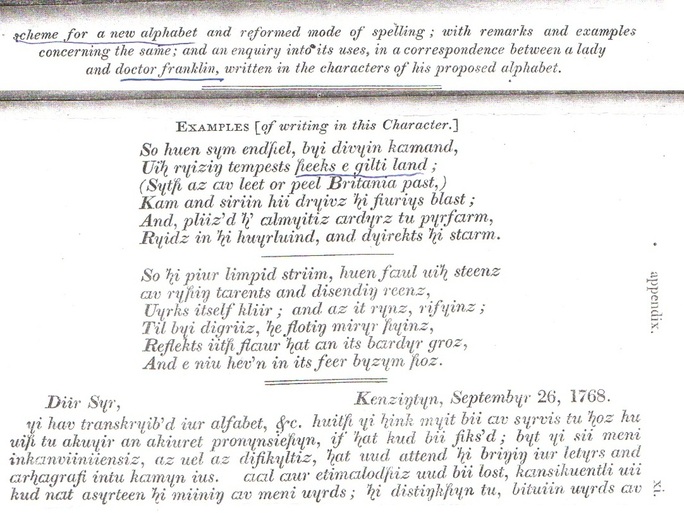 dThe Dialogue Between Mata Nanaki Ji & Satguru Hargobind Sahib, As Described by Bhai Kesar Singh Chiber in 1765 .Mata Nanaki Ji Asked the Almighty Satguru,That Instead of Son, You are Giving Gurgadi to Your Grand Son.Satguru Replied 'It Is the arrangement of the elders(Prvious Satgurus) .Your son will get the Gurgaddi, when time comes, And New things, information, and places will be revealed to the world."Makindu Sahib is the revelation of the scheme & series of Satgurus.All Satgurus Believe in "Sahej", which means goining firmly and steadily, but with a truthful character.Hence Gurdwara Sahib at Makindu Sahib and the site of Satguru Nanak Sahib in Boca Chica,Texas, U.S.A (Formerly Mexico), are the part of Sahej of Almighty Satgurus.

First Sikh warehose of the World, In Malindi (East Africa), image taken with his camera, by W.W. Fitzgerald, 1891. A Nishan Sahib is seen on the top of the building, which houses A Kenyan Govt. Museum now( by courtesy of University of Nairobi & University of Toronto, Rare Book Library). 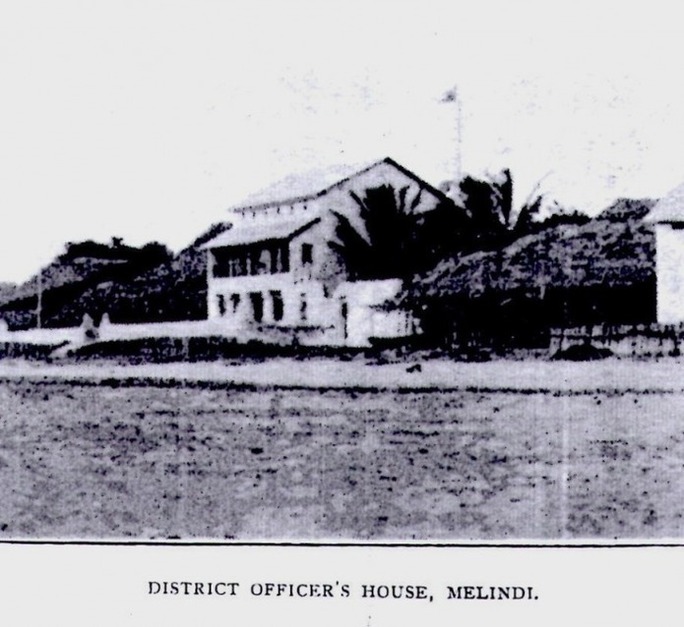 Confirmation letter from Malindi Museum ,dated December 15, 2010, declaring that this building belonged to Gujrati traders ( by Courtesy of my Photo Album of East-Africa). 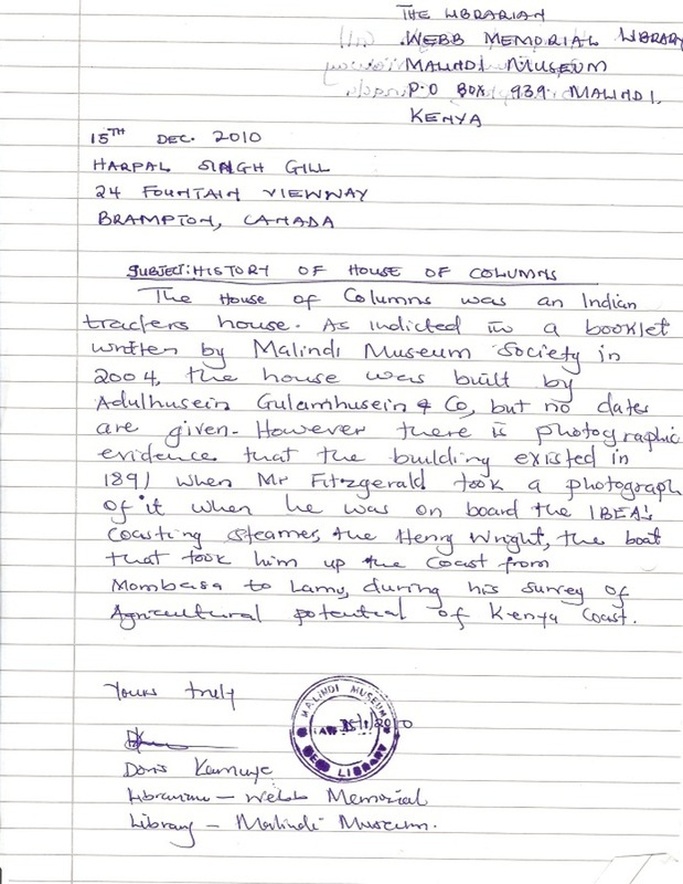 A Kenya Government Museum in Malindi( East Africa), This was the warehouse of Dasa Lubana( A Gujrati trader). 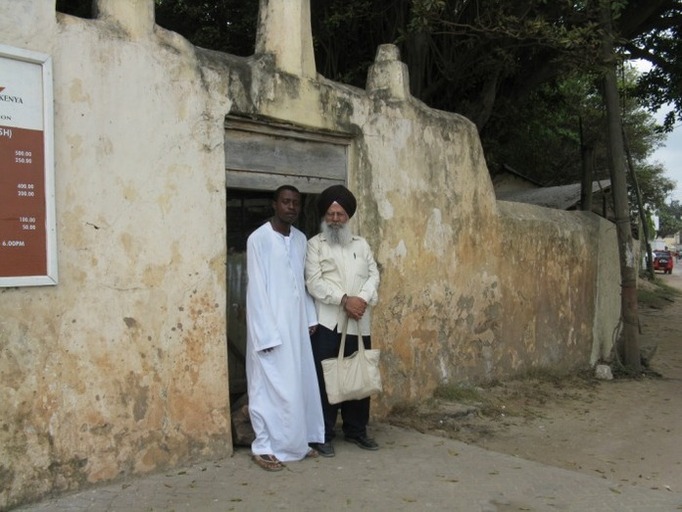 Coin released on Sepember 30th, 1577, by Mughal government, which includes "Ek Oankar( by courtesy of www.sos-arsenic.net ). 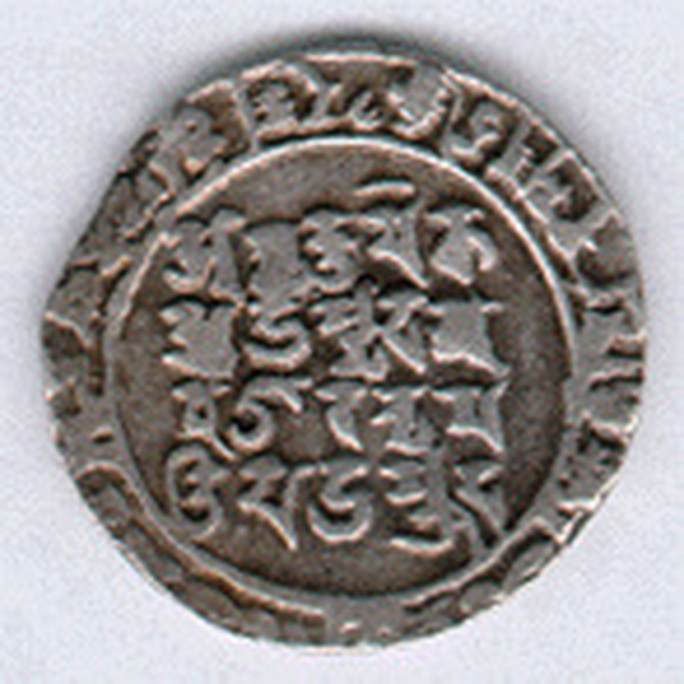