Bhai Kesar Singh Chhibber has given very important reference, when he discusses the dialogue between Satguru Hargobind Sahib and Mata Nanaki Ji. Mata Ji asked Almighty Satguru that instead of son, the grandson has been given Gurgaddi.Almighty Satguru told her it is the arrangement of the elders and not his`` Dharam Kraey Karm Dhuron Phurmaya----`` Holy Page No. 1280 of SGGS.When the time come, He (Teg Bahadur) would get the Gurgaddi of Satguru Nanak Sahib, and many more things and places will come into existance.Makindu Sahib was declared to the world in 1896, when the Railway Line was laid in Kenya.(ref``Bansawalinama``, by Kesar Singh Chhibber(1785).In 1790, another historian, Sarup Singh Kaushish, had given another reference,He wrote the family tree of Baba Makhan Shah Lubana.He said----Baba Makhan Shah LubanaS/O Dasa S/O Artha S/O Banna S/O Bhoru S/O Sawana.Dear congregation, who is this Sawana.According to History of Lubanas,this Sawna is Diwan Sawan Mal.The third historian, Bhai Rattan Singh Bhangu has given yet another important reference.He talks about ``Desey Wa``.These Desay Wa are the west of India, and some parts of them are in the sea,that is they are islands.These Desay Wa, are no other than Uganda, Kenya and Tanzania, which speak Swahili. Wa is the word of Swahili language.Diwan Sawan Mal has three where -houses,one at Lamu, the second one in Malindi and third one in Mariakani. All these were rented.(ref.History of Malindi Museum). Almighty Satguru Nanak Sahib and Bhai Sahib Mardana Ji visited the place, Makindu in 1519 and stayed a couple oof weeks here.In Nakowe near Lamu,Bhai Dasa worthy father of Makhan Shah Lubana presented horses to Satguru Hargobind Sahib and 50  Sikhs, including himself.Satguru and Sikhs visted Witu and stayed there for the night. In the next evening, the rached Malindi on horses. Next morning the whole caravan left for Mariakani.They held the Diwan of Rehras and Sri Asa Di War next morning. After the Diwan of Asa Di War, they reached Voi and then to Kibwezi.Next morning they reached Makindu Sahib and stayed there for two days.They Left for Lamu via Athi River and reached Timau, where a few indian traders were living.The villagers had a difficulty of water. They used to collect water from the rain. Satguru Hargobind Sahib blessed them with a spring. About that spring, you can read in details in my article `` Satguru Hargobind Sahib in Timau(Kenya).From Timau,they reached Embu via Meru.They held night diwan at Embu, Garissa.and finally at Lamu.They left the horses for the Sangat of Kenya and Left Lamu by boat(dhow) to the port of Karachi.They stayed at the Gurdwara Nanak Da Chashma, in Karachi. 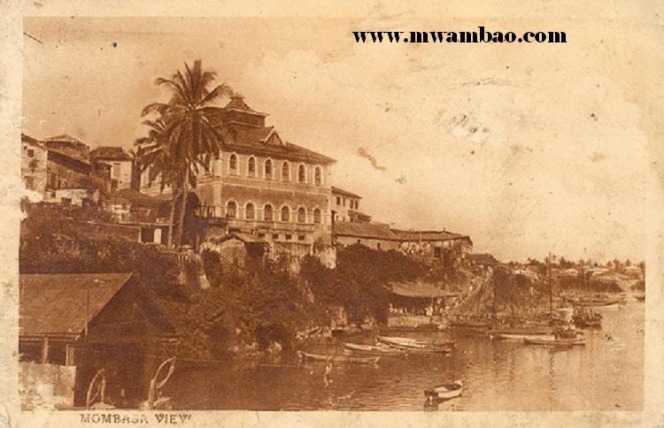 Kalindini is called deep water or waves in Swahili, whereas it is called"Lehran" in Hindi Language(this photo is taken as a courtesy of www.mwambao.com). 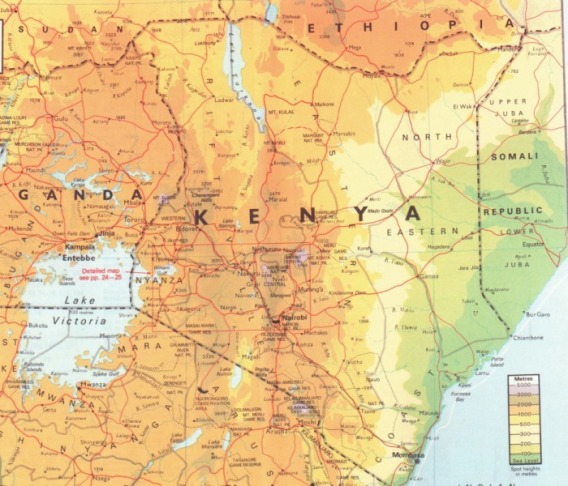 Map of Kenya in 14th century raveals that the village Makindu existed before 14 th century.(by coutesy of Google Map of Kenya-Images). 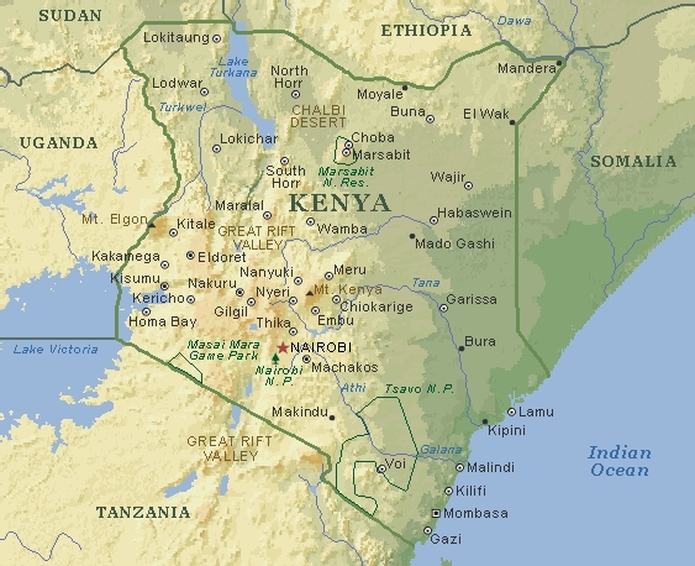 Makindu appeared in this world in 14th century.(by courtesy of google Map of Kenya in 15th century). 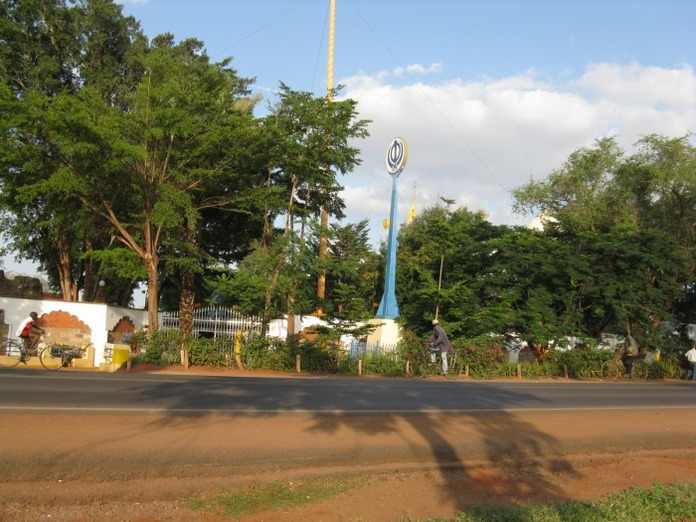 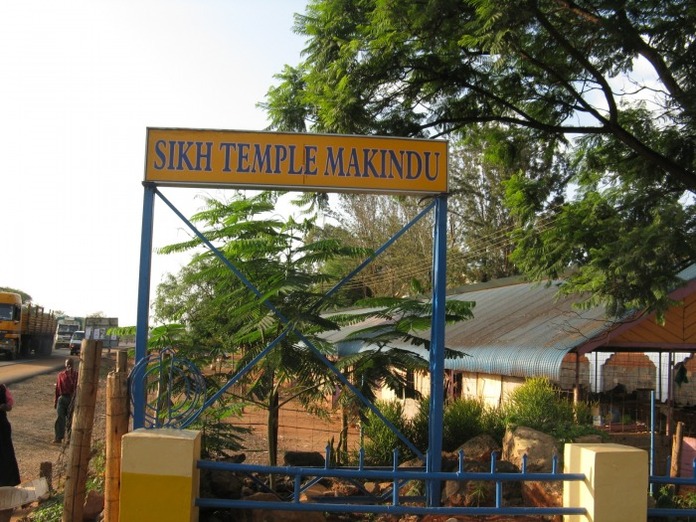 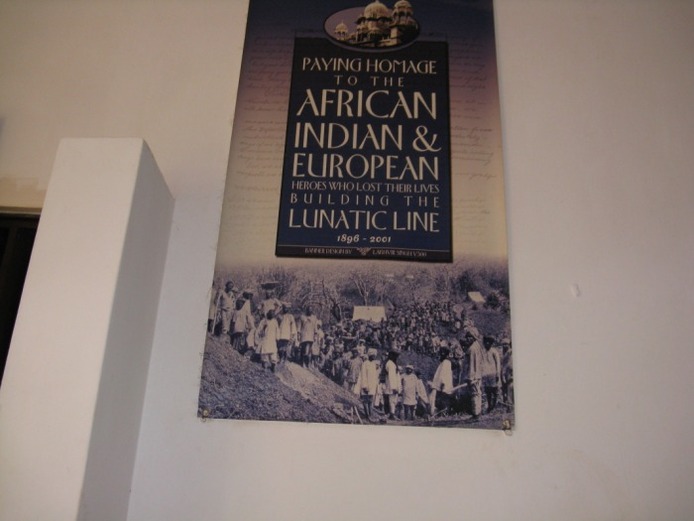 The dilogue between Mata Nanaki Ji and Almighjty Satguru Hargobind Sahib in 1644 A.D. had said that with the passage of Time,our son,Teg Bahadur would get the gurgaddi of Satguru Nanak Sahib.More places would be opened when the Time comes,because, our ancestor said"Dharam Kraei Karam Dhuron Furmaya", Holy Page 1280 of SGGS.This is the arrangements of our elders.Donot worry at all,Nanaki Ji"(Reference, Bansawalinama-Dasan Patshahian Ka, by Kesar Singh Chhibar, 1765). Dear congregation, your worthy know it well that Satguru Teg Bahadur Sahib Ji becme our Satguru in 1664.More places were open before public in due course of time.One place of Makandu Sahib was known to the public in 1896 when the portion of Makandu was completed on Nairobi-Mobassa Railways(reference.Asstt. Staton Master,Makandu Station).This Railway line was called Lunatic Line by my elders. 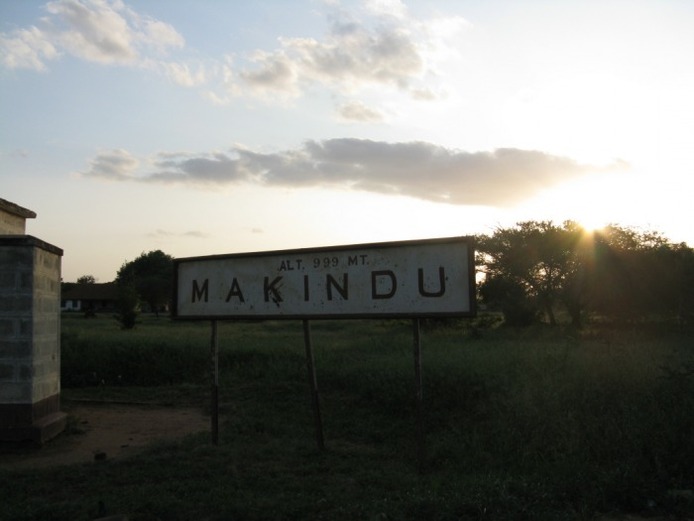 Makindu Sahib first appeared on this earth, in 1896, when the Railway track was shifted by 150 Karams, (900 feet).For the full details of this shifting, please see my next photo.

Original Track of Railway was Shifted from Milestone 65K.M between The Milestone No. 64 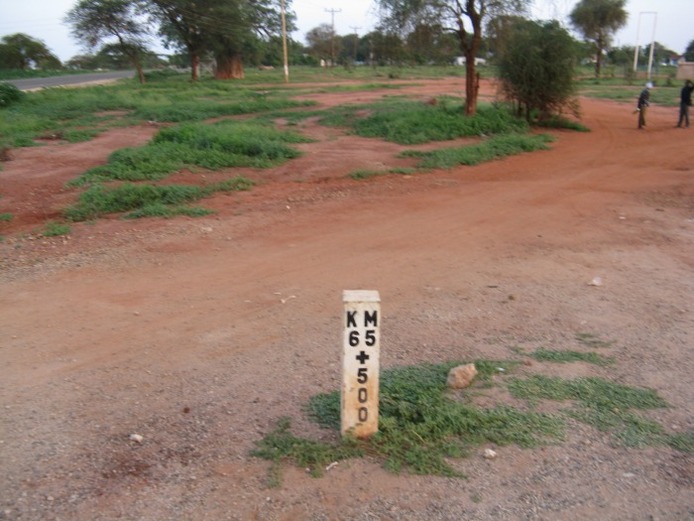 A Railway Station At Makindu. 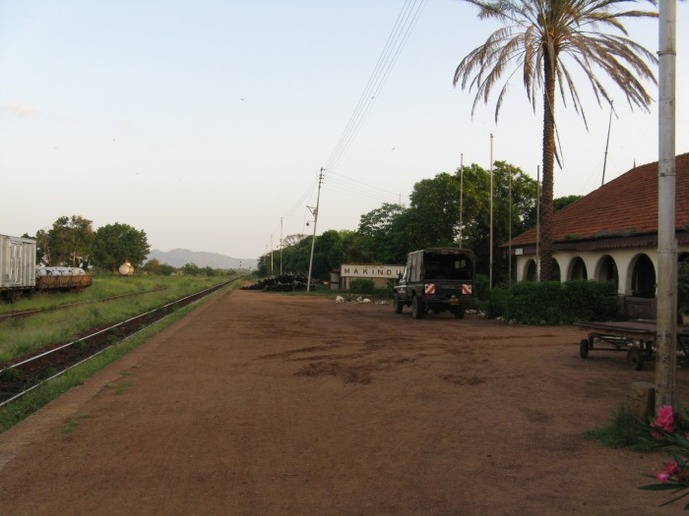 This the Railway Station of Makandu, which is about 3000 feet above the sea-level.(From my Photo-Album of East-Africa).

The Author, Bhai Harpal Singh Kasoor in Front of the old Makindu. 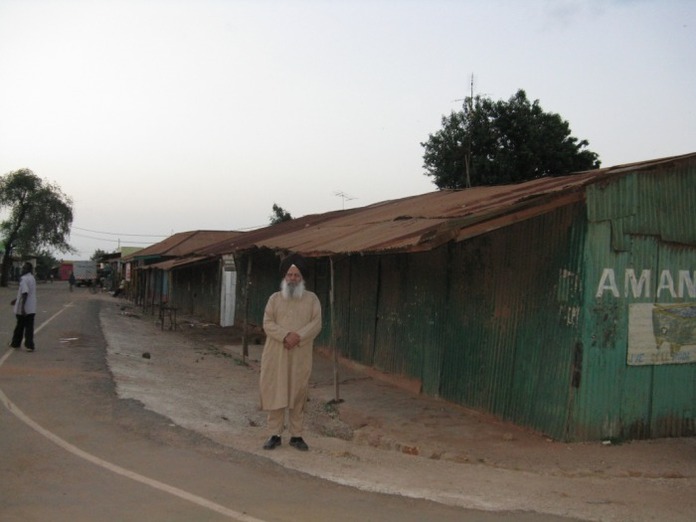 This the photo of old Makindu and the shop made 110 years ago(from my photo -Album of East-Africa).

The Quarters of Asians in Makindu Sahib 110 Years Ago. 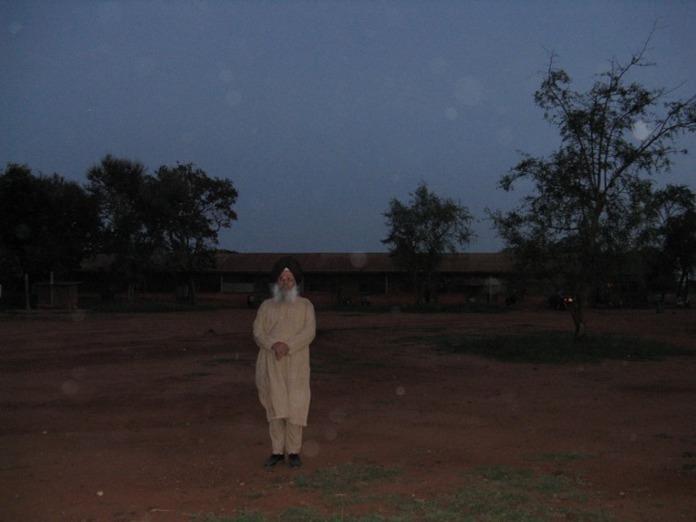 Our elders were allotted these quarters in 1895-96.These still convey the hard labour,our elders underwent.The Author,Bhai Harpal Singh Kasoor, seems to pay a rich tribute to his elders,(from my Photo-Album of East-Africa).

The Author and The Asstt. Station Master, Makindu. 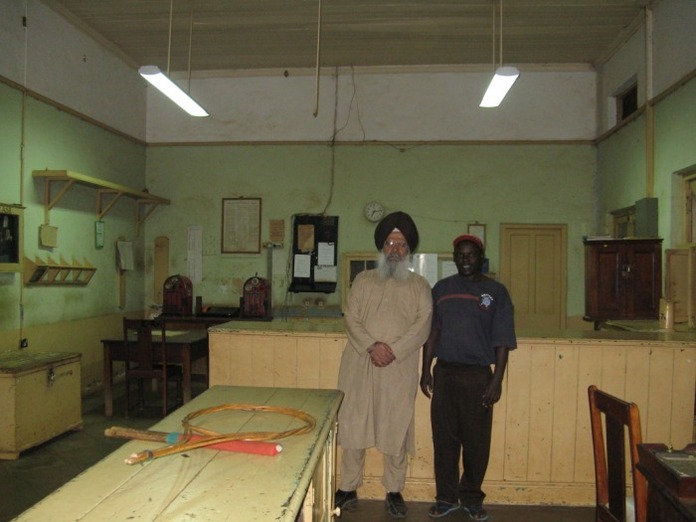 The Asstt. Station Master at Makindu Railway Station supplied the author the required information.((from my photo-Album of East-Africa).

The Rearside of Gurdwara Sahib at Makindu. 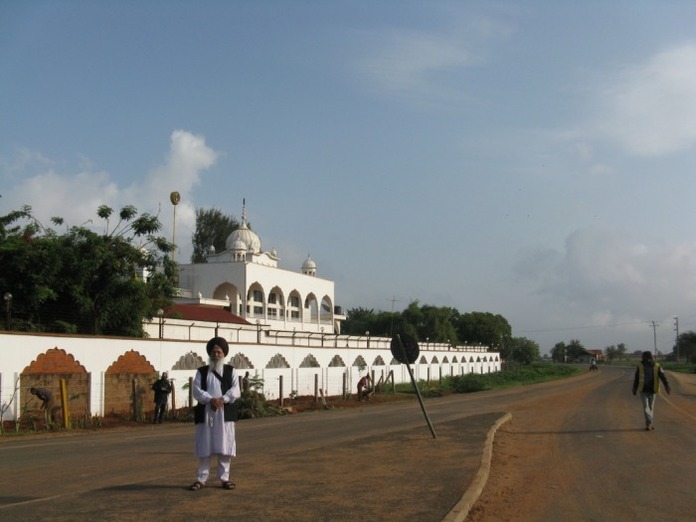 The Author, Bhai Harpal Singh Kasoor in front of the rear-side of the Gurdwara Sahib.(from my Photo- Album of East -Africa).

Baobob Tree,About 400 Years old in the Complex of Makindu Sahib. 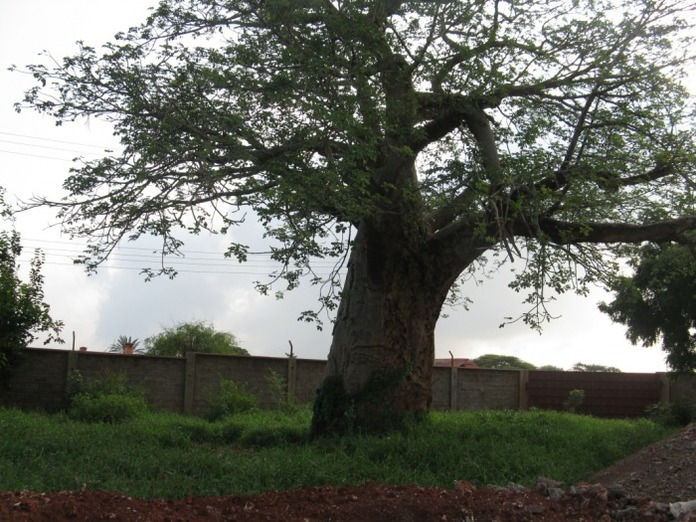 This historical tree reminds us Satguru Hargobind Sahib and 50 Sikhs, who came on horses, in 1632.

I Requested The Worthy Manager and Chairman of Makindu Sahib to Keep this Historical Tree. 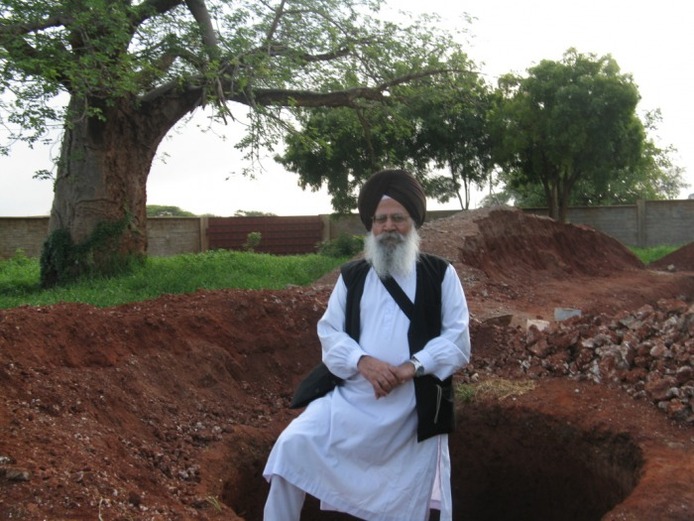 Bhai Harpal Singh Kasoor under the shade of this Holy Tree. Bhai Dasa, worthy father of Makhan Shah Lubana arranged 51 horses at Lamu(Nakobe). For full details, please read the informaion received at Lamu and Malindi,(from My Photo-Album of East-Africa). 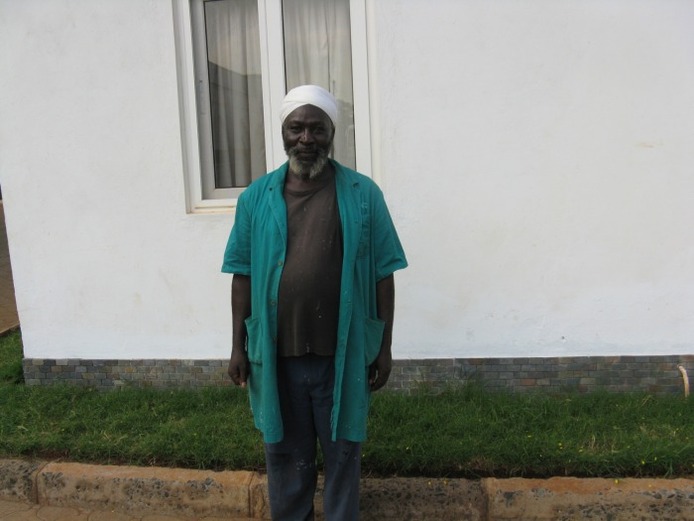 The people of this tribe is more near to Sikh Principles.These can be made Sikhs, if we take care and guide them.(from my Photo-Album of East-Africa).