The doyen of Sikh History, Dr. Ganda Singh, was of the view that Satguru Nanak Sahib  could not have a stay of one year in Mecca, as claimed by some primary Sikh Historians, other than Bhai Gurdas Ji.He was on a tour to redress the grivences of the tyrinesed public. " Charya Sodhan Dharat Lukaei---"Varan Bhai Gurdas Ji.Moreover, another historian, Sujan Rai Bhandari claimed in 1696 in his " Khlastut_Twarikh" that after the tour of the whole world, Baba Nanak settled in Sri Kartarpur Sahib.The letter of July, 1526, written by King Afonso-I of Kongo, to  John-III of Prtugal makes the thinking of Dr. Ganda Singh as cent-per-cent correct.Satguru Nanak Sahib and Bhai Sahib Mardana Ji, went to Kongo and other countries of Africa and elsewhere, as claimed by Bhai Rattan Singh Bhangu.Now the qustion arises,why the world history is silent about this crucial step of Satguru Nanak Sahib, which he undertook for abolution of slave-trading?This is definitely the voice of the Great Satguru against the violation of Human Right.  Hence, Satguru Nanak Sahib was the first one to speak against the slave trading. The logical answer for the silence of the history is the " Bull diversas" issued by Pope Nicholas-V, on June 18, 1452. This bull said that any person, who becomes a christian, should not be enslaved. This satement of worthy Pope  leads to conversion of religion and promoting the slave-trading.World history had already made this statement of the Pope, that is why , the Emperor keep  secret the visit of Almighty Satguru to different  countries of the world. But the letter of king Afonso had brought a truth before the public. You can not hide Truth for a long time. Sach Purana Hovey Nahin ----" .

Satguru Nanak Sahib and Bhai Sahib Mardana Ji visited Brazville in 1519.They discussed the problem of human slave-trading, not only in Kongo and other African countries, but also in different parts of the world, including India.He told the king that the same red blood is running in the vain of the slaves.you need only awakened (priests) and not the traders of human beings, which is clear from one of the two letters written by him to the king John-III of Portugal.Almighty Satguru has discussed the whole matter in this Holy Shabad. Mahalla-I " Harnan Bajan Taiy Skdaran Ena Parhia Naon.Phandhi Laggi Jaat Phahayan Age Nahin Thaon.So Parhia So Pandit Bina Jini Kamana Naon(Name).Pahlon De Jarh Andar Jamen Ta Uppar Hove Chaon.Raje Shihn Mukadam Kute. Jaae Jagayan Beithe Sute.Chakar Nahda ain Ghao. Rat Pit Kutio Chat Jao."
Harnan=to take away, not the animal deer
Bajan=  the bird baaj.
Taiy Sikdaran=  And A Slaver ( who takes work forcibly)
Enan Parhia Naon= They have read the Name only( Slave-logo)
Phandhi Lagi=They are busy in capturing
Jaat Phahayan=Their own fellow beings
Age Nahin Thaon=They are not accepted in Pralok
So Parhia So Pandit Bina Jini Kamaya Naon= those who do the Name of God practically, are wise and awakened ones.
Pahlon De Jarh Ander Jamme Ta Uppar Hove Chaon=If there is root insde the earth, only then there can be shade.
Raje Shinh Mukadam Kute=But the king have become lions and their subordinates are no better than dogs.
Jaae=same countrimen( Jaae Apne Khai--Slok Bhagat Kabir Ji).
Jagayan=Capture
Baithe Sute= who are sitting unknowingly( Sute sidh).
Chakar Nahda Paen Ghao=They injure with their weapons.
Rat Pitt Kutio Chat Jhao=They share among themselves, which belongs to other.

Jithe Jian Hosi Saar= where human beings are taken care of(Sarbat Da Bhalla).
Naki Wadhin Laitbar=Every one and untrustworthy can be transferred from this world, if they earn practically His Name.
The two letters written by King Afonso-I of Kongo to the King John-III of Portugal, written on July 7, 1526 & oct. 1526 confirms all this.
Letter No. -I reads                 English Version.
" Each day the traders are kidnapping our people - children of this country, sons of our nobles and vassals, even people of our own family.This corruption and depravity are so widespread that our land is entirely depopulated. We need in this kingdom only priests and schoolteachers, and no merchandise, unless it is wine and flour for Mass. It is our wish that this Kingdom not be a place for the trade or transport of slaves." Many of our subjects eagerly lust after Portuguese merchandise that your subjects have brought into our domains. To satisfy this inordinate appetite, they seize many of our black free subjects.... They sell them. After having taken these prisoners [to the coast] secretly or at night..... As soon as the captives are in the hands of white men they are branded with a red-hot iron."
At that time Rwanda and Brundi and some part of Uganda and Tanzania were belonged to Congo. The old Map of Kongo Empire confirms these areas. 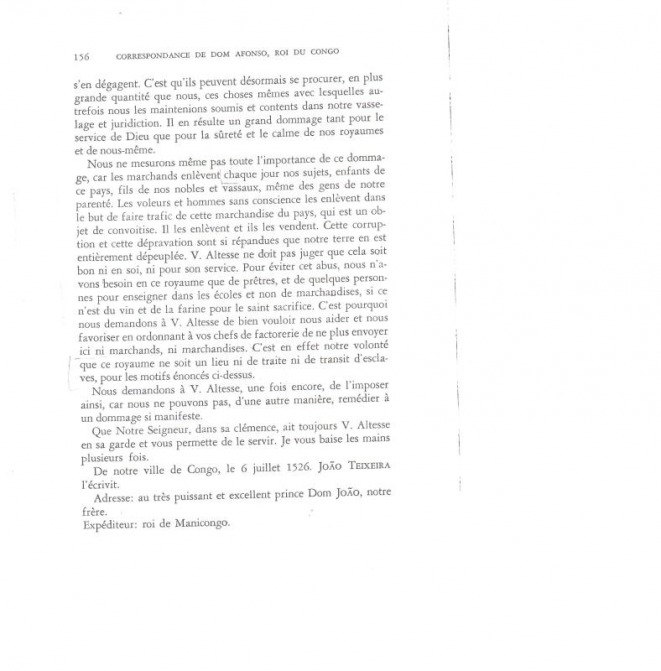 Satguru Nanak Sahib, Definitely, Talked About This Logo In Slave's Back. 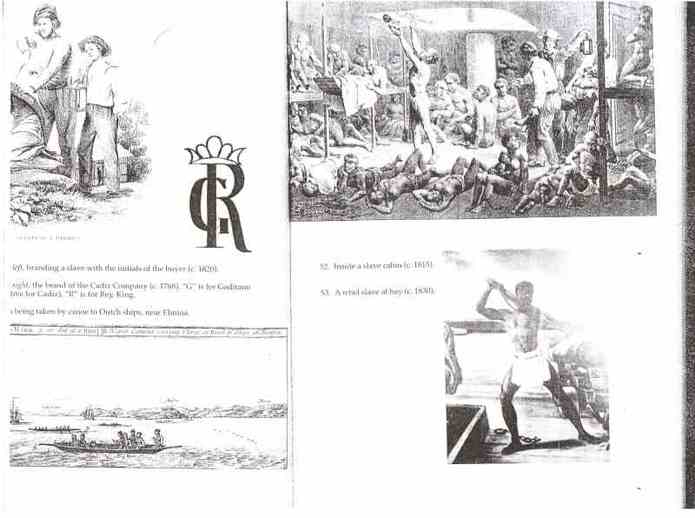 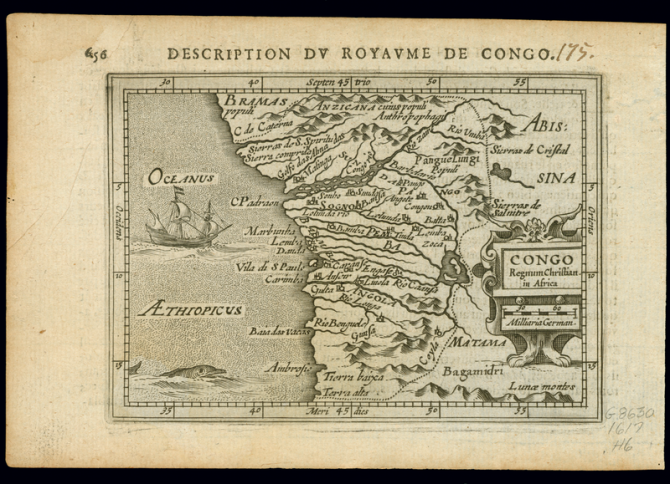 Satguru Nanak Sahib ji Toured Differnet Countries of This World for their release. 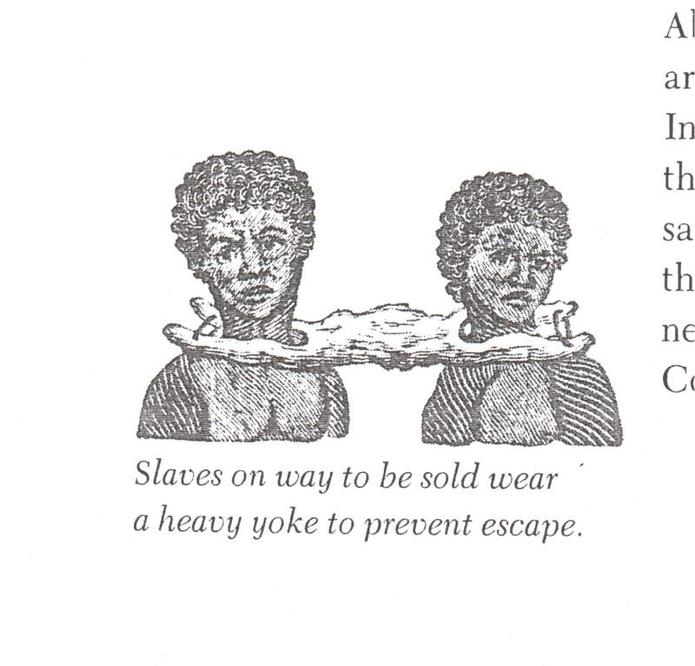 Slave-Trading in Congo, in 16th Century.
(By Courtesy Of www.en.wikipedia.org ). 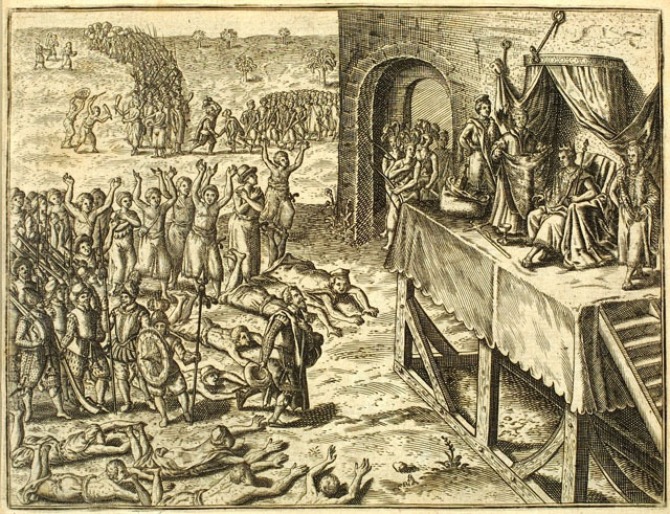 King of Congo Refusing The Portuguse Traders, Against Doing Slave-Trading. 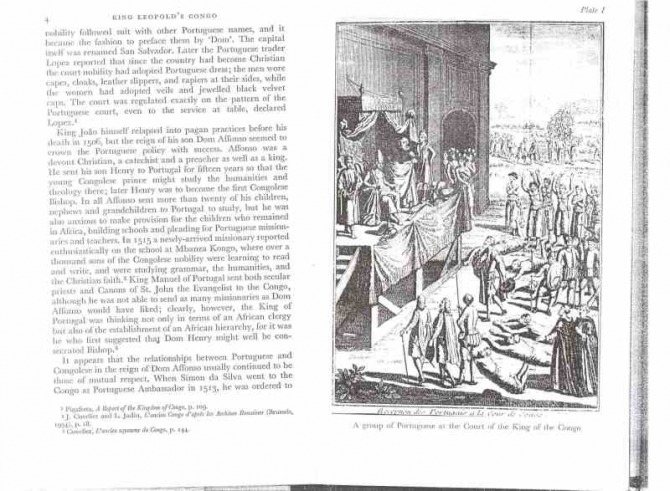