Khalsa Stayed in the Same Traders House in Canso in 1757, Visited by Satguru Nanak Sahib and Others in 1519.

In 1716, two Britishmen reported the massacre of Banda Singh Bahadur, at Delhi.They reported that brave Sikhs were massacred 100 everyday. The paragraph which refers to the arrest and massacre of the Sikhs in Delhi, in 1716,is extracted from a letter witten to the Hon'ble Robert Hedges, President and governor of Fort William, Calcutta.The letter is written by two British men , John Surman and Edward Stephensen of the British Embessey in Mughal Court. Another letter, which talked about the bravery of Sikhs against Ahmed Shah Abdali is alsoFort William, 1n 1767 ( ref. Letter Dated April 1767, from Fort William, PP 317). From these various incidence of the bravery of the Sikhs, the Madras Presidency decided to make a combines Irregular Cavalary of Sikhs and Marathas. In the second part of the Eighteenth century, that is in 1751, this type of irregular  Cavalry was made and trained by Travancore Govt. The father of James Wolfe. Mr. Edward Wolfe was lieutenant General in the British Army. At Fort William Highlan (U.K), he provided training to this Native or Colonial Troops. This has been confirmed by a letter of 1752, witten by James Wolfe from Invarness (Scotland). This Cavalry or Native Force came to Halifax via Scotland. After the training at Travancore, this cavalary was shifted to "fort William ,Calcutta for the security of the fort and other places.
When the British won the war of Plassey from Siraju-Doula, in 1757, a Sikh named Amir Singh alias Omi chand objected to Robert Clive'S taking the grant from the defeated king, for those soldiers, which were not killed in the battle of Plassey. The Irregular cavalary of has already left for Scotland with William Watson. the governor of Calcutta in 1756. In order to conceal this conspiracy, Robert Clive killed Omi Chand alias Amir Singh. ( Reference "The History of Sikhs, by J.D.Cunnigham, 1849).The Death of Omi Chund alway haunts Robert Clive as is visible from the cartoon of Omi Chand, in a magazine of 1773 (ref."Master of Bengal Clive and his India, by Percivial Spear")  Omi Chand was a merchant Sikh of Calcutta, who shifted from Punjab to Calcutta, and was an ally to the British ( Ref. "Clive of India, by Mark Bence Jones, 1974).

In North America, the Battles were fought on Indian Pattern, by Native Troops, and other well-disciplined Militia and not the regular Army( ref. " The First Global War, Britain, France and the Fate of North America, 1756-1775, by William R. Nester). on PP 29, Nester writes"" As in North America, the rivalry between France and Britain in India was fought  colonial rather than regular troops. Natve troops or Sepoys formed the backbone of both colonial armies." Sikh-Maratha cavalary was sent to Halifax to help Canadian Native Troops and Cananadian Militia (Ref. " The Life of Major General James Wolfe, by Robert Wright,1864). On PP 513, Robert writes"---consisted of six battalions of regulars--the flowers of the French line (British line)--with as many  well-disciplined Canadian Militia, and some light cavalry, besides a large body of Indians---" The Military Diary of 1757, describes that about 70 transport was arranged, 10400 Privates and 2 Company Rangers were sent to Union Cross Inn, which in Canadian records since 1535.But sime pravate records reveal that this inn was built in fifteenth century. " The Service of British Regiments in Canada And North America, by Charles H. Stewart,1962, has given the image of arrangement for the Natve or Colonial Troops, from the original documents of 1758-1759.War office has decided that the question of seniority will be decided according the agreement with the same country( ref. War Office letter, dated June 26, 1760).
In 1519, In Canso Traders'S House, where Bhai Malo, a trader was staying For the purchase of fur etc..Satguru Nanak Sahib, Bhai Sahib Mardana Ji and Bhai Donnaconna reached this Traders'S House, from Hochelaga (modern Montreal) and Stadcona(Modern Qubec City).Mr. Malo became the Sikh of Satguru Nanak Sahib here and went upto Bahia(East Brazil), via San Diago.While addressing the traders and others, Satguru Nanak Sahib spoke against fast.This has been confirmed by Donna Conna ( of Asthome Tribe) and Henri De Hassalt, a well known merchant of Bergen, Norway. Both Donna Conna (actually Donna Carna, but the Frenchmen pronouce in that way) and Henri De Hassalt met in Paris in 1536.In Paris the final agreement took place on July 15, 1536, between Donna Conna and Jacque Carter.( ref. The Kings Book, printed by Government Press, Ottawa, Canada, A Govt. of Canada Publication).Satguru advised the congregation, to eat lightly, instead of fast.He advised them to sleep lightly too (Khandit Nidra Alap Aharun---------)", Holy Page No. 939 of Sidh Gosat of SGGS ( Ref. "Historie De Novella Francia, by Marc Lescarbot, 1606). After about a week in Halifax and Conso, Satguru Nanak Sahib, Bhai Sahib Mardana Ji, Bhai Sahib Malo left for St. John'S, Virginia, Jamica, Port -of-Spain on their way to Yucatan, Boca Chica etc( in Mexico).

The Letter Written in April, 1767, From Fort William, Calcutta, Confirms The World-Known Bravery of Sikhs ( by courtesy of Fort William-India House Correspondence). 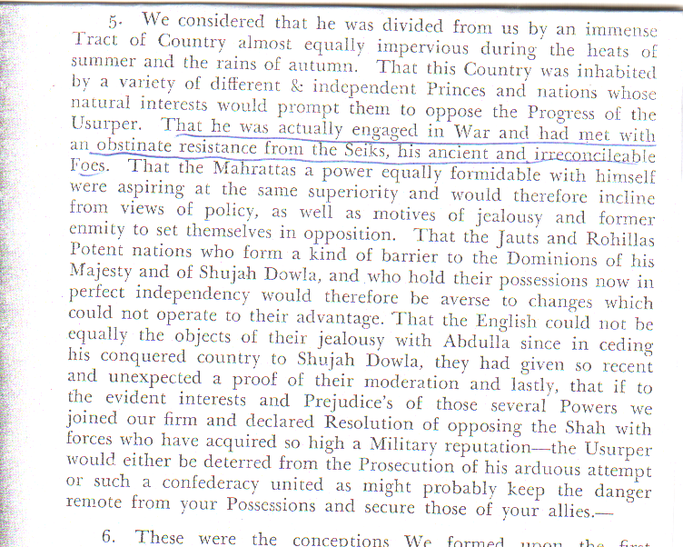 The Indian Year-Book 1943-44, Vol. 30, Confirms Travancore'S Assistance to the British, to Make and Train Irregular Cavalry. 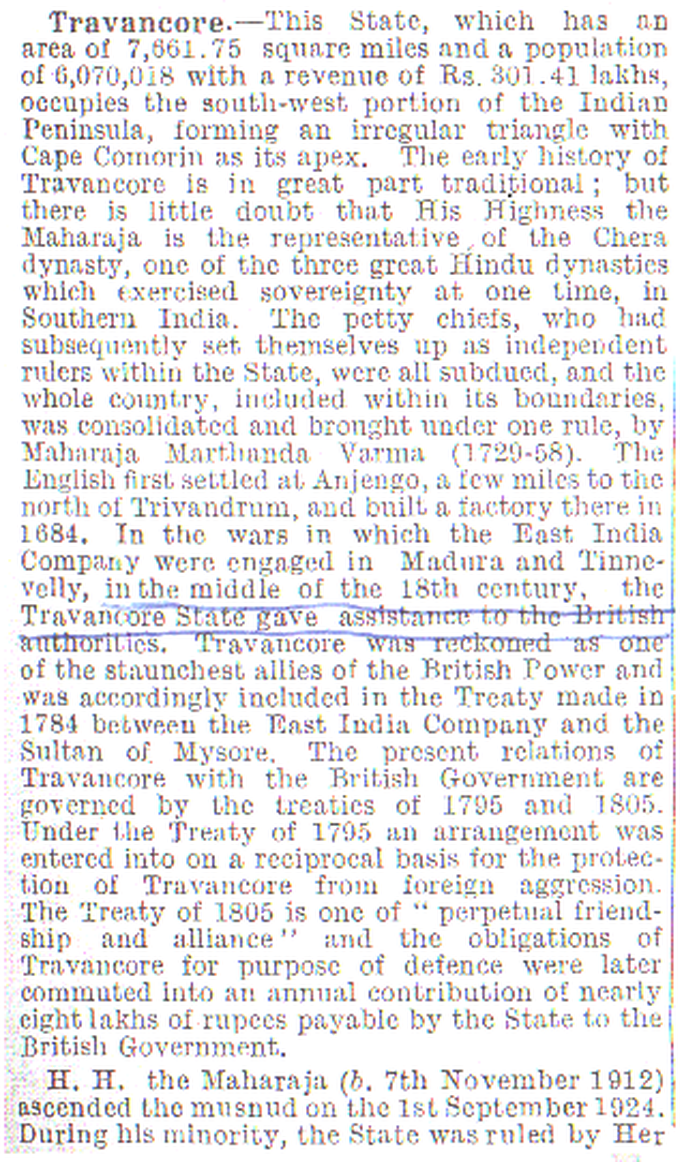 The Letter of James Wolfe, Dated 6th March, 1752, From Inverness (Scotland), written to his Mother, Reveals this Conspiracy( by courtesy of The Life And Letters of James  Wolfe, by Beckles Wilson,1909). 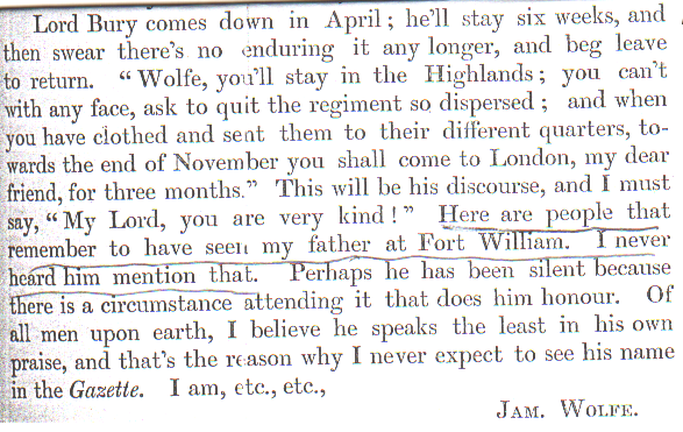 Page No. 126 of History Of Sikhs, by J.D.Cunnigham (1849), tried to reveal this conspiracy, for which he faced dismissal from his service. 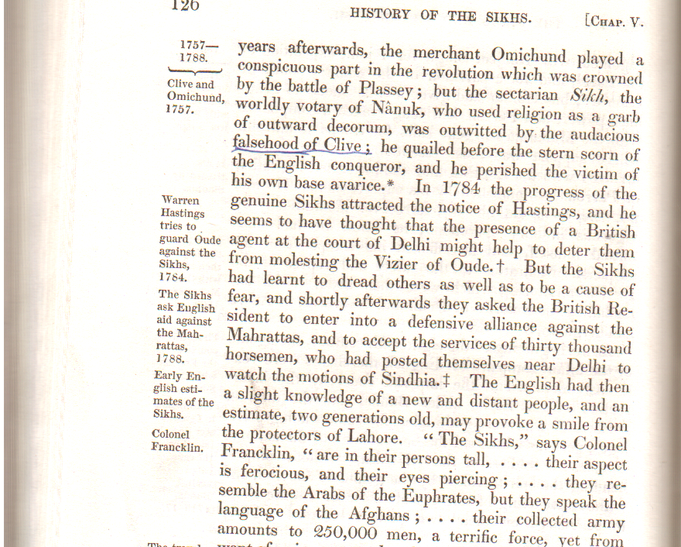 This Page of Master of Bengal, Clive And his India.presents the Eighteenth Century Portrait of Sikhs. Sikhs Used "Katar" in Their "Kamarkassa".Though this is a cartoon in a Magazine of 1773, yet it confirms killing of Omi Chund Alias Amir Singh, and the cospiracy, which Robert Clive wanted to conceal by Killing him. 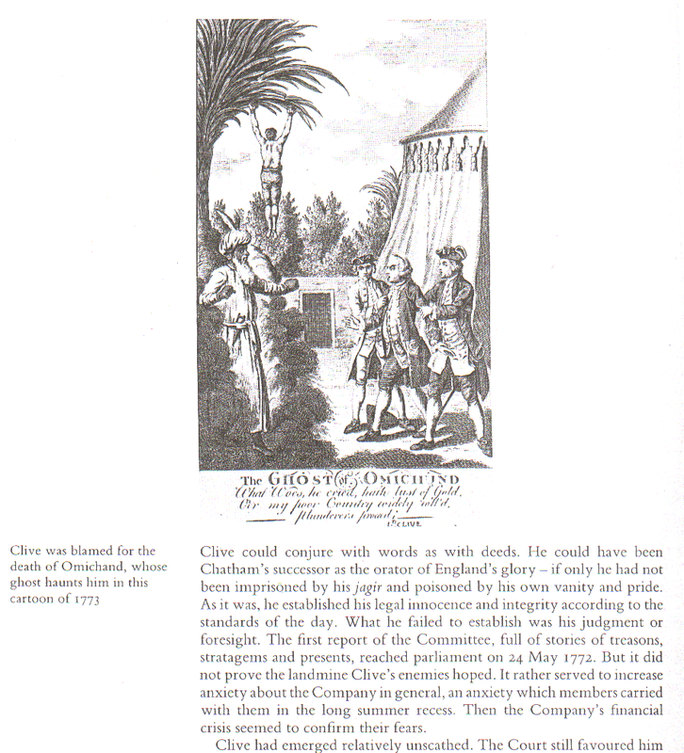 Omi Chand was undoubtedly  a Sikh From Punjab, settled in Calcutta, as a well-known merchant.He was called "Amir", a rich by Sikhs, later on when he took "Pahul", he became Amir Singh. 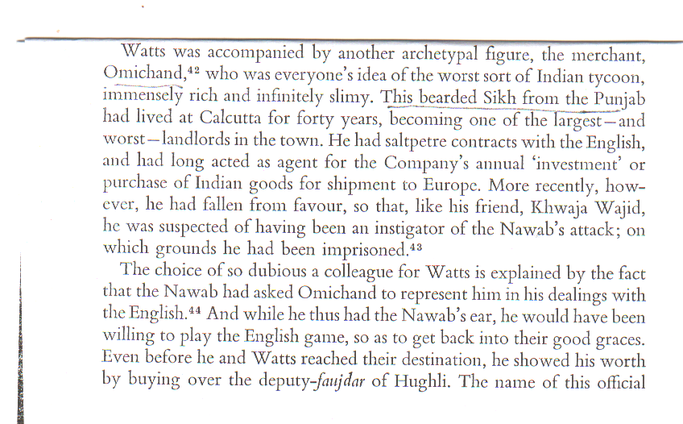 Line Of action was same in India and North America, by the British and the French( by courtesy of " The First Global War,Britain, France and the Fate of North America,1756-1775). 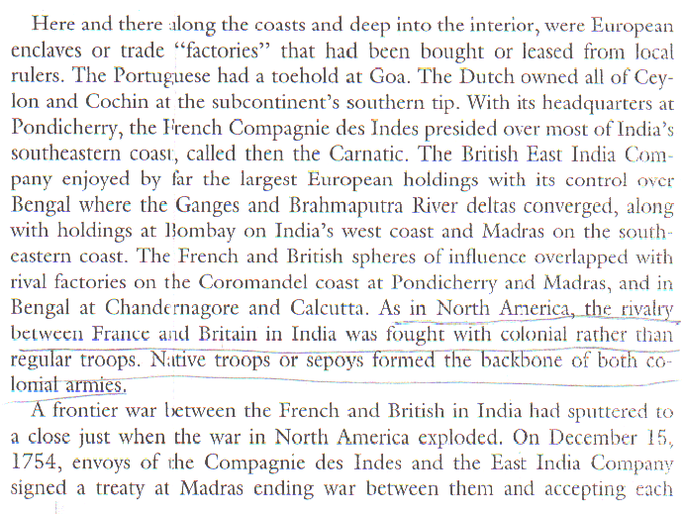 "Some Light Cavalry" came for the help of Canadian Militia and other Colonial troops, in 1757 ( by courtesy of The Life of Major General James Wolfe). 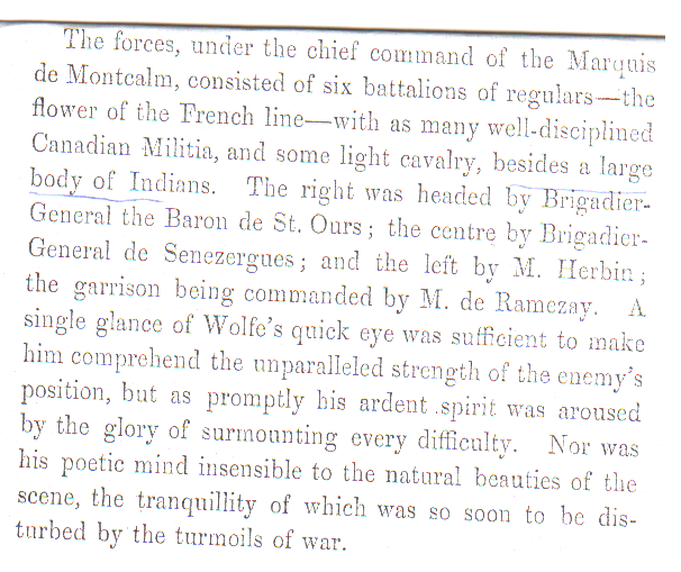 Irregurar Cavalary or Native Troops of Maratha and Sikhs, of the British Army ( Made in Travancore (Madras Presidency), in Halifax in 1757, at Union Cross Inn, the oldest Traders Coach House ( by courtesy of " The History of Travencore From the Earliest Times, PP226, Vol-I, 1878). 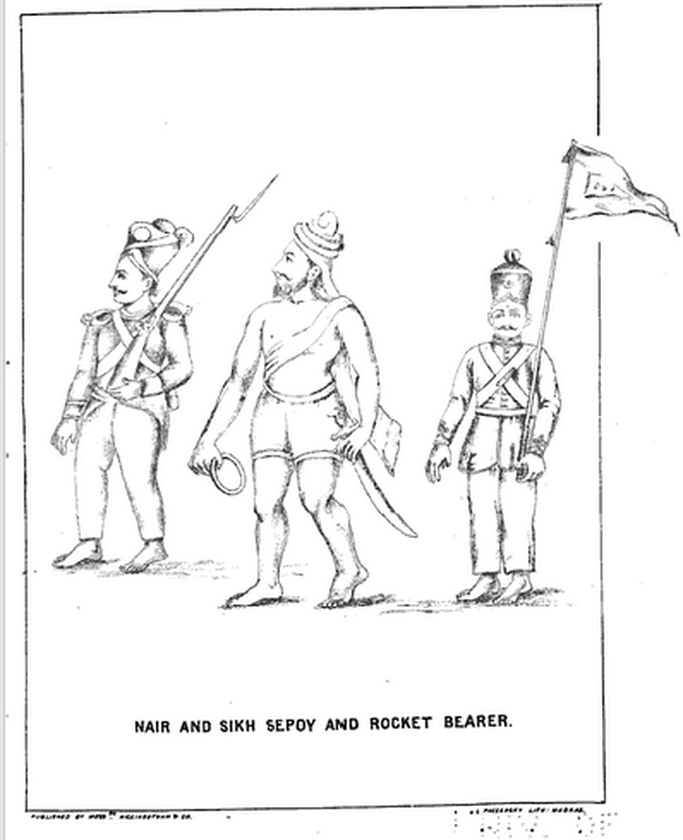 The Left Page of This Valuable Manuscript" Military Diary of 1757" ,confirms the Native Troops or "Privates", stayed in the Privateers Warehouse, Halifax.The Left page describes that about 70 transport, 10400 Privates, & 2 Company rangers left for Inn, whereas 500 were left sick ( diseased).( by courtesy of "Military Diary of 1757,Vol-I given to the author , by Thoms Fisher Rare Book Library, University of Toronto). 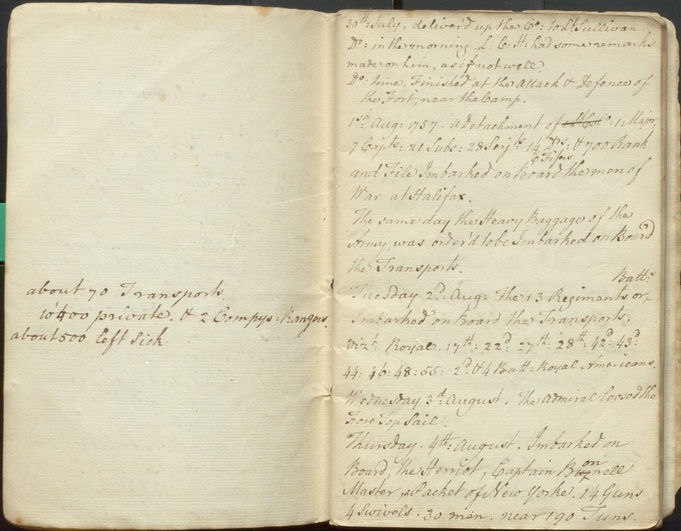 Marked Yonge Child is Definetly the Heir of a Sikh Soldier, Who Were Brought by  British Army in 1757. This Group Photo was Taken in 1865. ( By courtesy of Tullalip Indian School, Halifax). 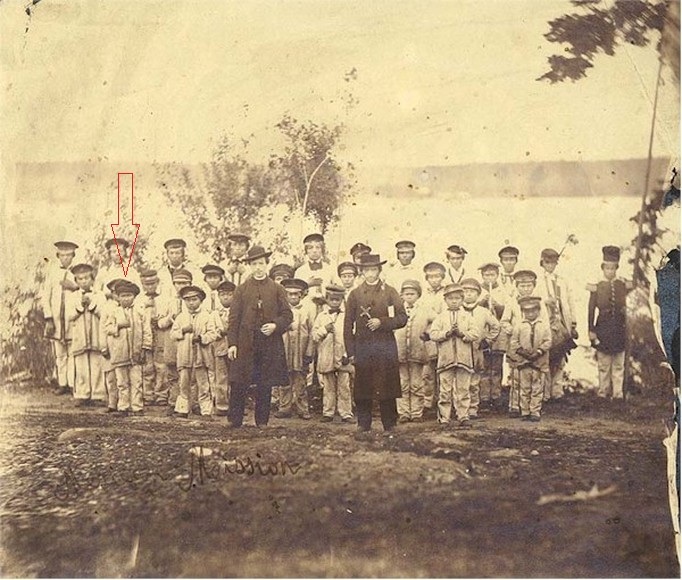 The Marked Sikh Security Guard, Confirms the Inhabittance of Sikh Community in Halifax Area Before 1890,because this group photo was taken in 1890( by Courtesy of Nova Scotia And Its People-1749-1917). 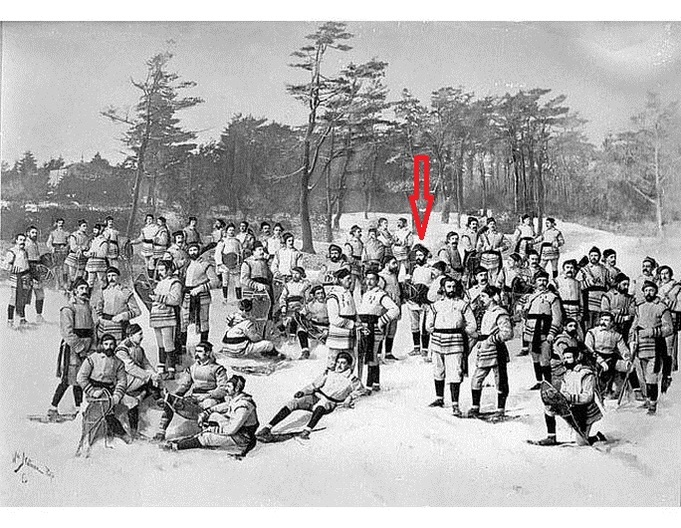 Arrangements of Native Troops in St. Lawrence River, as depicted in a portrait of Sep. 13, 1759 ( by courtesy of " The Services of British Regiments in Canada And North America, 1962). 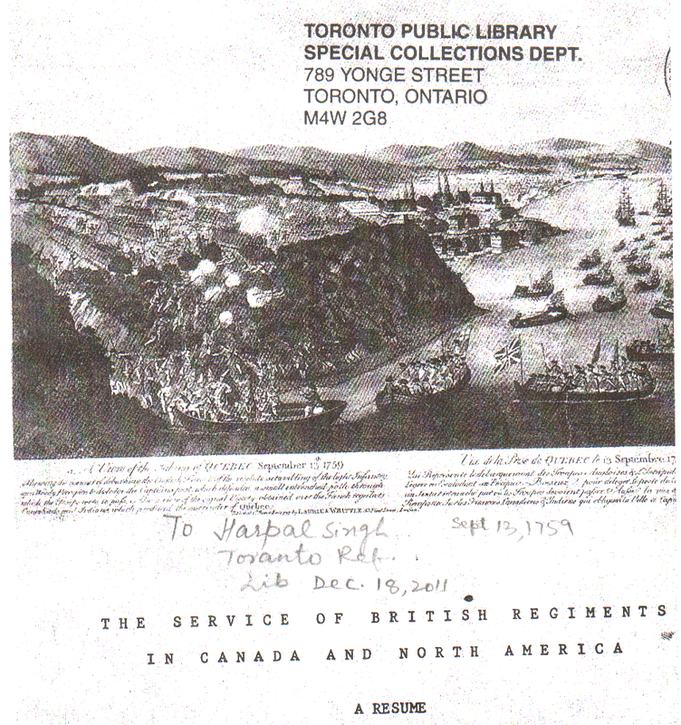 War Office Letter, dated 26 June, 1760 describes about seniority of the troops ( by courtesy of  The Lfe And Letters of James Wolfe, 1909). 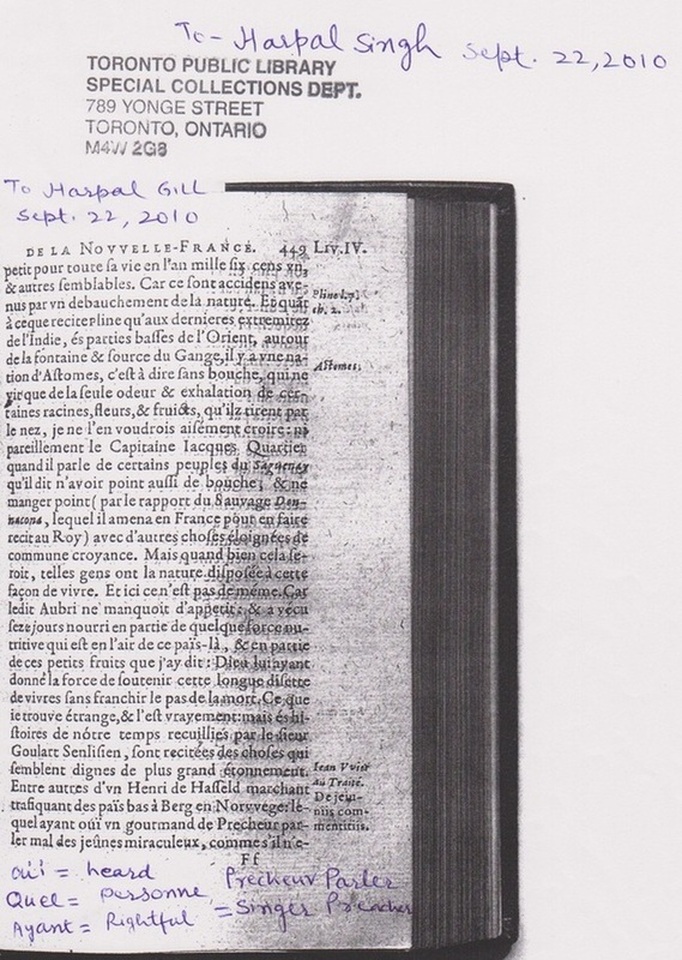 Forcible Land Agreement in the Name of the French King ( by courtesy of " The King'S Book on Qubec, 1911, published by Govt. Press. Ottawa, Canada). 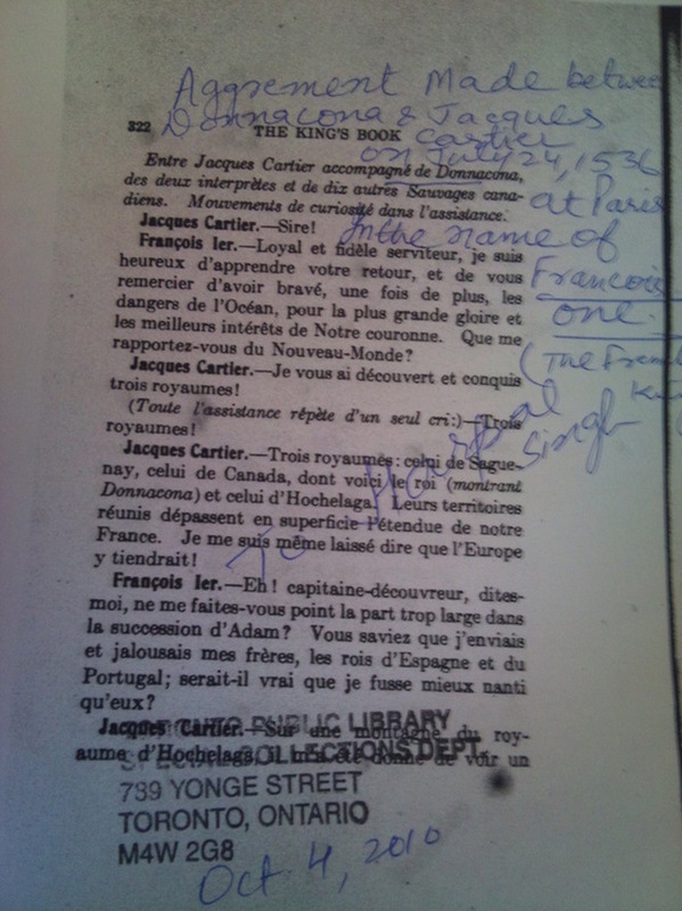