Sikhs Made By Satguru Nanak Sahib in Brazil.
(By Coutresy of Francois Balthazar Salvyns's paintings in 1791(He remained in Calcutta from 1791-1804).He travelled by Ship and happened to pass aport of Brasil from Netherlands via Porutgal and Brasil before landing in Calcutta. 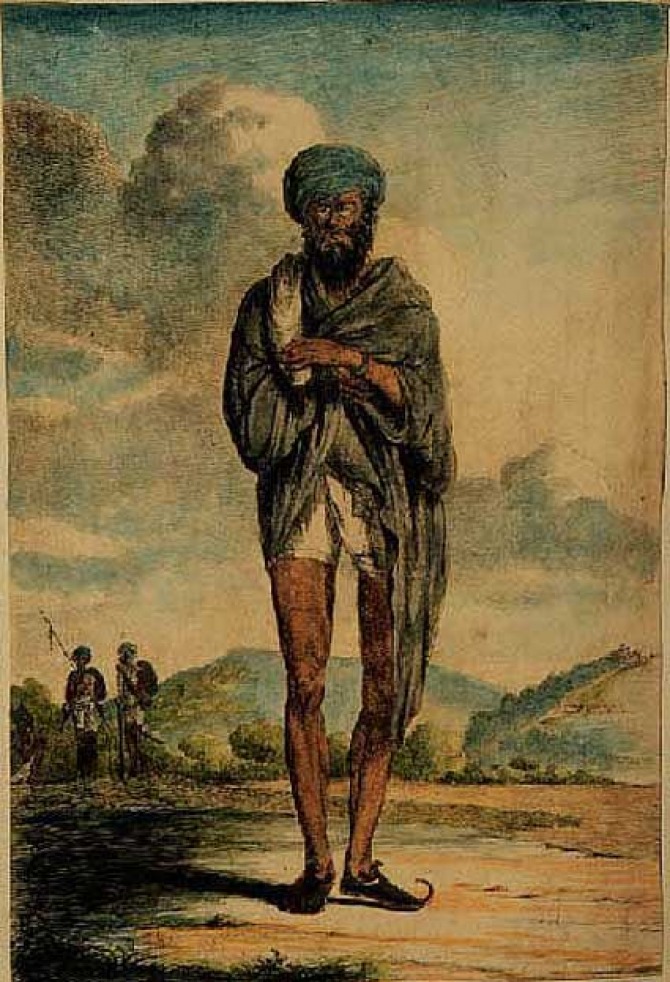 Linen Cloth is Distribted to Tribe People and Real-Indian-Slaves From Moirs(Old Name of Mamdot(Punjab), by Satguru Nanak Sahib and other Traders. 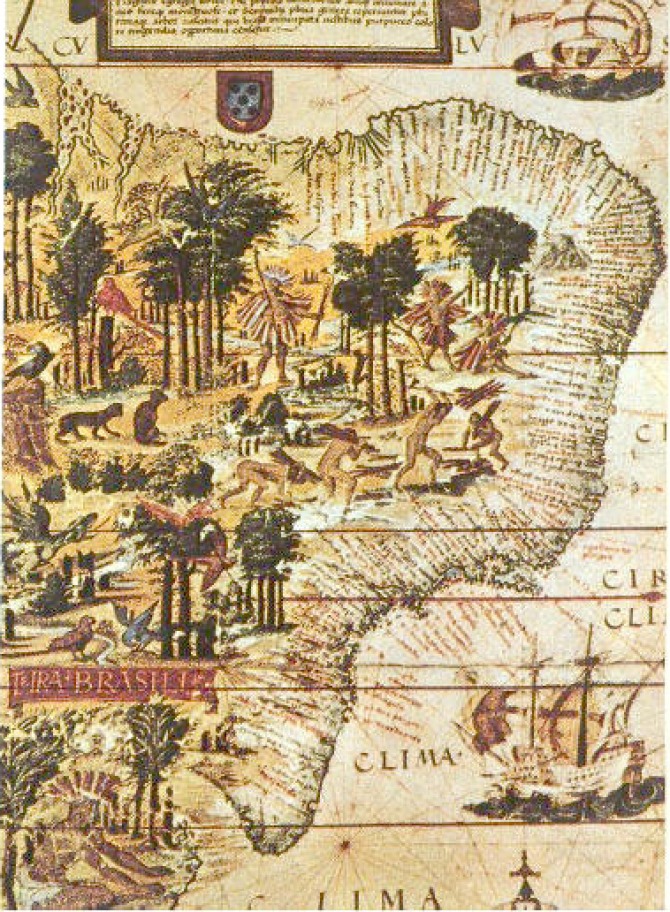 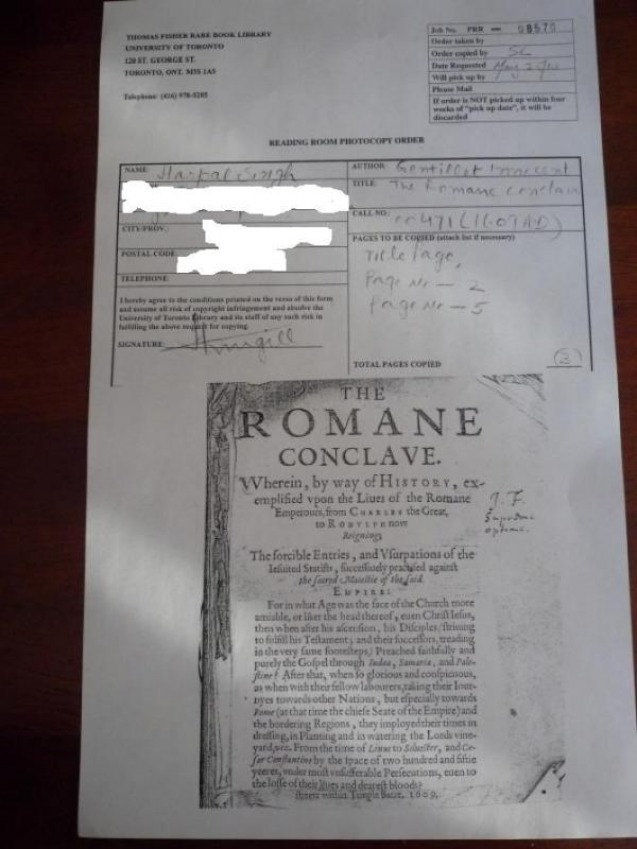 ( by courtesy of The Roman Conclave( Govt. Papers of Roman Govt. in 1609 A.D.) These Papers were written originally in Latin Language in 1560 A.D.).
If we click on Google" Henry--VIII and Nanuk, it gives the Truth behind it. This means, Sujan Rai Bhandari is absolutely correct in saying on the page 80 of Khalas-Tut- Twarikh(1696), that Baba Nanak came from the whole world.For the first time, Prince Maximilian of Germany let the whole world informed that Satguru Nanak Sahib went to Brazil. This he said in his German book in 1820.The name that German book is" Reise Nach Bresilien"( Travels in Brasil,1815, 1816, 1817).This has been confirmed by the PP 304 of Encyclopaedia Britanica, 1910.This particular page of Encyclopaedia Britanica, confirms three things-Henry-VIII, Nanuk, and Brazil. The colonial Brazil confirms that Brazil was under Portugal and John-III was its emperor at that time, and Henry -VIII was the Emperor of Britain..Moreover, the statement of Henry-III keeps the important reference of Satguru Nanak Sahib's visit to England and Brazil for the Abolition of slavery.Henry-VIII said about Nanuck(old English spelling) " Pilgrims of Grace" and " The Two Grand Visitors" were against the Royal Tyranny.(PP 173 of Henry-VII and The English Monastries,1895).Dear Congrgation! to which direction this statement goes?.If any Emperor belonging to later period says this fact, then we can assume that ( This Emperor) had got this information either from Goindwal Sahib or Lahore.But Henry-VIII was  the contemporary Emperor of Satguru's life-time. Now the question arises, that How Henry-VIII got this information?Satguru Nanak Sahib Bhai Sahib Mardana Ji were the "Pilgrims of Grace" or Special Visitors".
Letter No. 3815 of 1517 A.D. said that 200000 slaves were ordered by England and other European countries from Africa, Middle-East, Syria and India. They managed this quantity of slaves from these desired countries. A batch of Real-Indian-Slaves and those from Africa, were sent to Rio-De-Genario(Brazil). Realising the pains of these slaves, Satguru Nanuck Sahib and Bhai Sahib Mardana Ji went to Brazil.The Punjabi and Indian slaves remember upto1820( As told by Prince Maximilian in his German book),Ek Onkar, but tribes only remember Ek( One God).Prince Maximilian was the first to talk about the tribe of Botocudos in 1820.It is a severe tragedy on our part that due to ignorance, we could not took care of these tribes.Some of the people of this tribe(Botocudos) call them Nanuk--The sons of soil.The second The important information is given by The Roman Publications.These publications confirm that two preachers with three principles(gospels)--Naam Japna, Wand Chhakna, Kirat Karna, started from India and went to different Nations, including Rome.The publications of Roman Empire wrote on PP 2 of The Roman Conclve( Roman Empire in Latin)----"The Priests To Teach, to Sacrifice, to Pray----"
The fifth page of this Roman Conclave(1609) still gives the important information.-----" Preached faithfully and purely the Gospel  through Indea.Samaria(Modern Israel), and Palestine ? After that, when so glorious and conspicuous as when with their fellow labrourers(Slave Trading), taking their journeys towards other Nations, but especially towards Rome (at that time the chiefe seat of the Roman Empire), and the bordering Regions---"This vividly confirmed that Satguru Nanak Sahib and Bhai Sahib Mardana Ji went to Rome, and other Nations including Brazil and other boardering Regions of Roman Empire.

Another book named" The First Three English Books on Amerca", gives an informative information. The rebels of the brothers of Sultan Ibrahim Lodhi opened fire at a separate settlemene(dhani) of Mamdhot in the early morning and captured many persons. Some of them died on the spot.Rest of them including those wounded. were made slaves. Via Spain and Portugal, finally a batch from them reached the Olinda port in Brazil.They were released and started work in sugar and coffee fields. They were distributed the linen cloth by Almighty Satguru Nanak Sahib and other traders( ref."The First Three English Books on  America,1558).Some of the members of Bodocudos Tribes ran away in fear and did not wear the cloth. some of them still lives naked.Satguru also advised the tribe peoples not to eat human flesh.Some of them called themselves as" Nac-Nanuk, meaning" Sons of the soil".